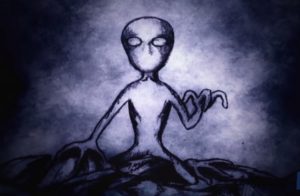 Never before or since, has such a creature been seen in Massachusetts. The sightings lasted only three days. There are theories, but what it was remains a mystery.

All three witnesses were teenagers. The descriptions, except for one detail, didn’t vary. Some thought it was a teenage prank; however experts in the paranormal extensively interviewed them and others who knew them and found the teens to be credible.

Even today, one of the witnesses, now a prominent artist, is still haunted by the April 1977 event.

What came to be known as the Dover Demon was first seen at 10:30 p.m. on April 21, 1977, in Dover, Massachusetts, a tony suburb of Boston. Three 17 year olds were in a car when one of them, Bill Bartlett, glimpsed something creeping next to a wall of stones on the west side of the street.

The creature turned its head and looked directly into the car’s headlights. The teen saw two large, shiny orange eyes glowing brightly. Its large oval head as large as the rest of its body was on top of a skinny neck.

The body, less than four feet tall, was gangly with large hands and feet. The hairless skin appeared to be rough- textured.

None of the others in the car saw the critter. They testified later that Bartlett seemed genuinely distressed. When the teen arrived home his father noticed how upset he was. Bartlett drew a sketch of the entity to show him what he saw.

Second Sighting of the Dover Demon

April 22, 1977, approximately 12:30 AM, John Baxter, 15, was walking home from his girlfriend’s house. He noticed a short figure walking toward him. He thought it was a friend of his.

He called out his friend’s name, but there was no answer. As they grew closer, the creature stopped. Baxter approached it to see who or what it was. It scurried down a shallow gully, rested, then went up the opposite bank.

When it was at the bottom of the slope Baxter looked more intently at it. The creature had its arms wrapped around a tree trunk. The fingers were very long. His description of the creature matched Bartlett’s.

On the evening of April 23, 1977, Will Taintor, 15, was driving Abby Brabham, 15, home. Brabham said she saw something in the vehicle’s headlights.

On the left side of the road, there was a hairless creature, down on all four limbs, facing the vehicle. The body was lanky and it had large, oversized oval head. Its eyes glowed green.

When she was told Bartlett he said the eyes were orange, she said they appeared green to her.

Investigation of the Dover Demon

Cryptozoologist Loren Coleman and ufologists Walter Webb and Ed Fogg interviewed the witnesses, parents, friends, teachers, school officials and police. There was no evidence of a hoax and the teens were described as credible. A local newspaper gave the creature its name, the “Dover Demon.”

The Boston Sunday Globe, October 29, 2006, published an article about Bartlett’s experience. He recounted what happened on that 1977 April night and said he had no idea as to what it was.

He’s an artist with works displayed in galleries on both US coasts. He said that night’s events still haunt him. Internet sites and books feature his experience with the Dover Demon more frequently than his artwork.

Some consider the demon a cryptid, an unidentified mysterious animal, UMA, but it was only seen for three days and is, most likely, not a naturally occurring species.

Cryptid sightings occur over longer stretches of time. Some ufologists theorized it was an alien or a human mutant as a result of an ET experiment gone awry.

There are those who believe it was a being from another dimension, transferred to earth through a warp. What the Dover Demon was remains a mystery.