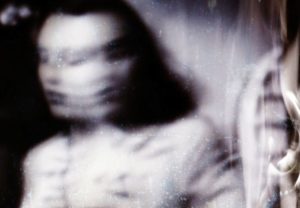 This has been an ongoing experience for my mother, sister, and me. We have all seen this “thing,” and the only way we can explain it is that it’s my sister’s doppelganger. Not many people look like my sister. She has very long red hair, so it’s not hard to miss her and you can’t mistake her for someone else.

This all started in the Fall of 2004 when I was in sixth grade in Oviedo, Florida. I was in my room trying to fall asleep when my door opened and my sister came in — or what I thought was my sister.

I didn’t have a nightstand at the time, so I just used a picnic cooler with a blanket over it. It had my alarm clock and some hair brushes on it. My “sister” came over and was messing with my brushes, which I remember really made me mad because it was late and I was trying to sleep.

I began yelling at her to get out of my room. She didn’t say a word, but just abruptly turned and left. As I watched her leave, it seemed to me that she was walking funny. She walked at a very fast pace with her head turned and hair over her face, hiding her eyes and mouth.

The next day, I confronted my sister about coming into my room in the middle of the night. She swore – in fact, still swears to this day – that she was not in my room and had no idea what I was talking about.

That was my first experience with her doppelganger. My mom and even my sister have seen it, too. One day about a year after my experience, my mom was at home while my sister and I were at school.

We were old enough to wake up and get ourselves ready and make it to the bus stop without any help from our parents. My sister would wake up earlier than anyone since her school started at 7:20 a.m.

From my understanding, she did in fact make it to school on time. Yet my mom swears up and down that she saw my sister walking around the house with a towel on her head, like she just got out of the shower.

My mom was so mad that my sister missed the bus to school, she started yelling at her. Again, just as in my experience, this “person” was walking in a fast-paced manner, my mother said, and she never saw her face.

She was walking so fast, but my mom kept yelling at her, thinking she was going to have to drive my sister to school. When my mom followed her into the other room, however, there was no one there.

When my sister came home after school and my mom told her what happened, my sister was puzzled because she really was at school. My mom thought she was losing her mind. I don’t believe I told my mom about my experience until after she saw it, too. We both came to the conclusion that there had to be something wrong with its face, and that’s why it never let us see it.

I believe there is something dead wrong with its eyes, but that’s just my theory. We never felt threatened by it because at the time we really thought it was my sister.

THE DOPPELGANGER FOUND HER

There was one time my sister saw this entity for herself, and I must say her experience was a little different. She was working as a shift manager at Pizza Hut. She was at the restaurant pretty early in the morning before all the other workers got there. She saw someone walking in the kitchen area. This person had long red hair, just like her, and was also dressed in a Pizza Hut uniform, just like she was.

My sister said a feeling of dread came over her and she was really scared. She actually had to leave the building and wait for another employee to show up. She was certain that it wasn’t another employee she saw, since she was the only one with red hair.

She also confirmed that the doppelganger moved fast and its face couldn’t be seen. It really scared her to think that her doppelganger had finally found her and followed her.

My sister firmly believes that if she looks the doppelganger in the face that she will somehow die. That’s just the feeling she gets from it, and that’s why it scared her to know that it followed her to work.

That was the last time any of us saw the thing… for a while. We didn’t forget about it, but I guess we all thought maybe it couldn’t find us anymore. But we were wrong.

The most recent event happened last year. My sister and I are all grown up now; she’s 26 and I’m 20 now, and we have since moved away from Florida. My mom and sister live in Kentucky on the same property and I live in New York.

It was a typical day for my mom. She was by the sink doing some dishes in her home. There is a window right above the sink, and when she looked out of it she saw “my sister” walking up the path to the front door wearing her work uniform. She expected to see my sister come through the door to finish getting ready for work, but she never came inside the house.

An hour later, my real sister did arrive at my mom’s house. She was still in her pajamas, so my mom questioned her about what happened earlier. Like so many times before, my sister denied walking over there and told my mom she was still sleeping at the time this happened. She wasn’t needed at work until a few hours later, so there was no reason for her to be in her uniform.

They were both freaked out by this latest incident. We all thought the doppelganger had left since it had been years since anyone saw it, but somehow it found my sister again.

I really don’t know how to explain all of these events, and I’m not sure if it will ever leave my sister alone. I don’t know what will happen if she looks this entity in the face, if anything, but I hope she never does. For now, though, it’s been a while since any one of us have seen it… but that doesn’t mean it isn’t out there.