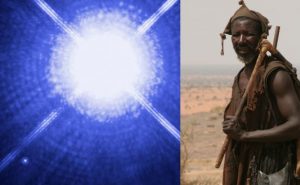 The Dogon people are an tribal group that resides in the plains, cliffs and plateaus of Mali, West Africa, with a population that totals somewhere between 400,000 and 800,000 people.

Although their culture is considered to be somewhat primitive, it is believed that they possess advanced knowledge of astronomy and extraterrestrial phenomena, the origin of which is still heavily debated today. The cultural history of the Dogon extends back thousands of years to 3200 B.C., and their tribal lineage is believed to be connected to the ancient Egyptians.

According to Dogon folklore, the star Sirius (one of our closest celestial neighbors at only 8.6 light years away) actually has a companion star that is not visible to the naked eye. Their traditions claim that this mysterious invisible companion star completes an elliptical orbit around Sirius every 50 years.

This information has been an integral component of their religious beliefs for thousands of years, and yet scientific research did not confirm its validity until the mid-1800s when Western astronomers began to notice irregularities in the movement of Sirius.

This prompted further research and eventually, a theory was formed that Sirius was being influenced by the movements of a second star. This theory was finally confirmed in 1862 when astronomers finally detected a faint companion star, which eventually came to be known as “Sirius B”.

Although Sirius B is classified as a white dwarf star and is relatively small, its extreme density is heavy enough to exert a notable influence on Sirius A. In fact, researchers speculate that one teaspoon of the ultra-dense material found in Sirius B could weigh as much as 5 tons here on Earth.

Amazingly enough, the orbit of Sirius B was indeed found to complete itself every 50 years (the actual calculation is 50.04 +/- 0.09 years), further confirming the ancient oral traditions of the Dogon.

This staggering insight into astronomical phenomena was first recorded by Marcel Griaule and Germaine Dieterlen, two French anthropologists that first made contact with the Dogon in 1931 and continued to intensely study their culture for the next three decades.

The astronomical knowledge of the Dogon tribe was considered to be so advanced and so precise that a significant amount of controversy began to arise regarding its origins. According to Dogon legend, their ancestors received this knowledge from the Nommos, a race of extraterrestrial beings that visited the Earth thousands of years ago.

Dogon myths describe the Nommos as being amphibious, fish-like humanoids that arrived on Earth in a rotating “ark” accompanied by fire and thunder. The Nommos supposedly established a large water reservoir on the Earth and then inhabited the water.

The word Nommos is actually derived from a Dogon word that means “to make one drink” or “to cause to drink.” Dogon legend also refers to the Nommos as “The Monitors”, “The Teachers”, and “The Masters of the Water”. Interestingly enough, several variations of this archetype of amphibious extraterrestrial beings have also been found in ancient Acadian, Sumerian and Babylonian myths.

The Nommos, according to the oral tradition of the Dogon, were visitors from a planet in the Sirius system, and were considered to be spiritual guardians and saviors, ultimately sent to Earth for the benefit of mankind.

The Dogon actually worship the Nommos as deities, claiming that they are ancestral spirits. According to the legend, the Nommos were the ones that imparted the knowledge of Sirius B to the Dogon ancestors, along with other advanced astronomical insights such as Jupiter having four major moons and Saturn having rings.

Ancient Dogon traditions also claim to have knowledge of the Earth being a part of a heliocentric solar system, or in other words, a system where the Earth and other planets revolve around the Sun. These facts were all present in Dogon literature, oral tradition and writing tablets long before the observations of Copernicus and Galileo confirmed them in the early 17th century.

To further add to the overall mystery surrounding the Dogon people, a book entitled “The Sirius Mystery” was published by Robert Temple in the 1970s, quickly gaining popularity due to its focus on the paranormal characteristics of Dogon folklore.

In the book, Temple contended that the Dogon’s intimate knowledge of cosmic phenomenon and astronomy could not have been possible without the assistance of some type of extraterrestrial visitation in the distant past. Temple further asserted that the Nommos were the race of beings responsible for imparting this knowledge to the Dogon people, which subsequently stirred up opposition and skepticism from the scientific community.

One anthropologist in particular, Walter Van Beek, also extensively studied the Dogon and claimed that the tribe was actually heavily influenced by their interactions with Marcel Griaule, to the point where their claims about Sirius B were somewhat of a confabulation created by Griaule himself.

Noted astronomer and astrophysicist Carl Sagan also commented that the first known connection of the Dogon people to the knowledge of Sirius B emerged in the early 1940s, allowing plenty of time for Western visitors with more advanced scientific knowledge to contact and subsequently influence the tribe.

These assertions may have some merit, but they fall short of explaining the existence of a 400-year-old Dogon artifact depicting the Sirius configuration. In addition, the Dogon have been conducting ceremonies celebrating the binary cycle of Sirius A and B from as early as the 13th century.

The Dogon have given Sirius B the name “Po Tolo”, a phrase meaning “the smallest star”. The word “Po” is actually a reference to the smallest seed known to their tribe, further emphasizing how small the star is in relation to Sirius A.

Their folklore also suggests the existence of a Sirius C, claiming that it is the star around which the native planet of the Nommos orbits. Although no solid evidence existed for a Sirius C during the 1970s when Temple first published his book, later astronomical discoveries have revived an interest in the possibility that the Dogon had yet even more advanced knowledge: In 1995, two French astronomers, Daniel Benest and J.L. Duvent, authored an article in the well-respected journal “Astronomy and Astrophysics” entitled “Is Sirius a Triple Star?”

Their observations suggested that a small, red-dwarf star appears to exist in the Sirius system. They came to this conclusion after years of intense research regarding certain perturbations in the orbit of the Sirius star system that could not be explained by any other known means. Could it be possible that the Dogon are right once again, or is this just another unexplained cosmic phenomenon?