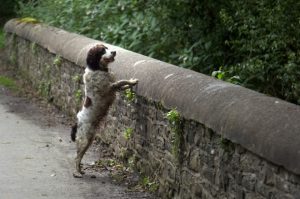 Built in 1895 by Lord Overtoun, near the village of Milton in West Dunbartonshire lies the Overtoun Bridge.

An arch bridge which has become famous for the large number of dogs who have leapt over the side to their death. The famous location near the Overtoun is the Overtaun mansion which is nearly spreaded across 2000 acres.

The mansion was built by James White. The mansion was further expanded during its construction by the owner, forming the western and eastern side of the estate.

The western side is more famous known as western drive. But the two sides are separated by a water fall and to connect this sides, the famous Overtoun bridge was constructed.

The Victorian bridge stands 50 feet over the Overtoun Burn which flows below. The dog jumping phenomenon started sometime in the 1950s continuing to be a common occurence for the following five decades, with each account having certain similar details.

Strange things have been noticed that dogs actually climbing the parapet wall before making the jump. Even stranger are the reports of dogs surviving their brush with death, only to return to the bridge for a second attempt. Some more interesting facts about the bridge is it has never claimed the life of humans but engulfed more than 600 dogs till now, averaging one dog per month.

What makes this tragic mystery even more mysterious is that many of the dogs that jump from Overton Bridge jump from the same side and from almost the same spot: between the final two parapets on the right-hand side of the bridge.

But why is this happening? What would compel otherwise contented canines to leap from the stone structure?

Some believe that the bridge is haunted. In 1994, a man threw his baby son off the bridge claiming that it was the anti-Christ. Later, the man attempted suicide there as well. Was Overton Bridge responsible for this tragic event?

Another theory comes from Celtic beliefs that Overton Bridge is a “thin place” where the barrier between the world of the living and the world of the dead meet and sometimes cross over. Some believe that dogs are more sensitive to the paranormal and perhaps they are getting spooked by spirits. In fact, one psychic toured the bridge and, although she admitted that she felt nothing malevolent – only peace, her dog pulled on its leash to the right side of the bridge.

So it is suggested that the height of the bridge’s granite walls significantly impairs the dogs’ sense of sight and hearing, so when they go to investigate the smell, they are unaware of the massive fall that awaits them. This would explain why the dogs all went over on clear and dry days, because the mink smell wouldn’t have been strongly dilluted by the rain.

Whatever the explanation for the famous Dog Suicide Bridge actually is could be debated for years without satisfaction. Just take some advise from the locals and keep your best friend on a leash when visiting Overton Bridge.