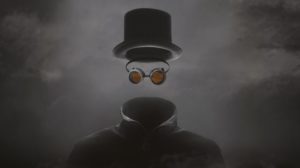 The best account of the Vazquez story that we could find was published in Fate Magazine’s November, 2000 edition. It’s author, Helen Torres, claims that she was present in the Vazquez home when this event occurred, and thus became an eye witness… not to the disappearance, but too the young man’s boast of what he was about to do behind closed doors in his room.

It all happened in 1936, in the midst of the Great Depression, when Vazquez, a resident of Fernandez, was experimenting with the black arts in an attempt to gain either wealth or fame in the heart of global despair.

Twenty-year-old Bernardo Vazquez was obsessed with the unknown and black magic, as well as getting rich. People who knew him in San Juan, Puerto Rico say he may have succeeded with a bizarre experiment that made him invisible.

After consulting his books on the occult, he one day told his mother that he had learned how to become invisible – through a strange ritual involving a black cat, wood from an old coffin and a tin can. He believed that by boiling the cat and using a resulting bone to place under his tongue he could be invisible at will.

One night be barricaded himself in his room at the back of the house to carry out the ritual. His mother became concerned when he never came out, and she called the authorities.

They had to break into his room where they found the disturbing remnants of his ritual – the burned wood and a disemboweled black cat. But Bernardo was nowhere to be found. Did he indeed become invisible… or did he vanish into the unknown?

Bernardo Vazquez was a young man, around 20 years old. That was way back during the Depression in 1936. We used to live on Fernandez Juncos Avenue in San Juan, Puerto Rico. At that time I was nine years old and even then I was very inquisitive over anything that had to do with the unknown. Mama shared the same predilection and she used to explain in detail whatever situation occurred that was hard for me to understand.

When Bernardo started coming around during the afternoon hours, telling his mystery tales, Mama would let me stay so I could enjoy the stories. Many years later, after hearing numerous frightening tales, I realize how dreadful his confessions really were.

The young man was always in a hurry, and in his mind the most important wish was to obtain immeasurable riches-with no concern as to how he obtained them. He was an avid reader, especially books on black magic.

His appearance was anemic and his eyes had a penetrating look. We never heard him talk about his family, and the only person he talked to in our neighborhood was Mama. It was not easy for him to get familiar and he waited some time to trust Mama with his secrets.

With his mysterious look and his whispered voice, Bernardo intrigued anyone he talked to. Mama and I would listen to him as if we were in a hypnotic trance, and when she thought that she had heard of all Bernardo’s schemes and everything related to the unknown, out of nowhere he bewildered us with something different. 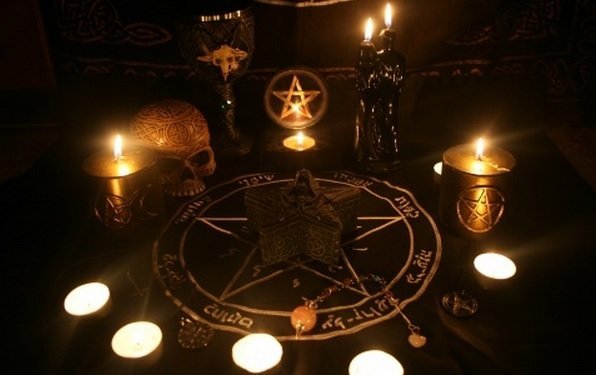 Sometimes when he left late in the afternoon he gave us a ceremonial farewell, leaving us with something new:

“I will come back tomorrow with news of my new ‘job.’ Now I must leave-it is getting late and the cemeteries are closed by five o’clock.”

Mama felt sorry for him. She did not agree with his beliefs, and always dismissed him with a blessing. Sometimes, she advised him of the danger that he was getting himself into. “A lot of people call the diablo, Bernardo,” she said, “but only a few are brave enough to welcome him.”

Those were words with light. Bernardo never knew the terrible destiny that was waiting for him. He asked to be rich at all risks, even trading his life for it. He wanted power, without giving any care as to whom he was dealing with.

One day the poor man felt that he had reached his goal. On a Friday evening of a full moon he came to our balcony and sat on top of the veranda smiling. Mama knew that he wanted to share his secret with her.

“Does that smile means something good?” she asked him.

“Yes, Doña, it does. At last I have everything ready. This time I will not fail,” the happy man whispered, adding, “I got myself the black cat, pieces of wood from an old coffin-you know those that are discarded in the cemetery, and a big tin can.”

Mama listened with horror and exclaimed, “Holy God! What are you planning to do with all that?”

“Well, Doña, if I cannot be rich the easy way, I will try the hard way. I have found the best solution. I will be invisible! Yes, Doña-invisible. Tonight, exactly at mid-night, I will light a fire in my iron hearth using the logs from the cemetery and I will put on water to boil. Once this is done I will put the black cat inside the boiling water until he dies. The rest will be very easy.”

“Jesus, Mary, and Joseph!” whispered Mama, making the sign of the cross. “That is terrifying. Do you know the strength of a cat?”

“Bah! I can deal with him. The only thing that bothers me is the smoke. My room is very small, and I know it will get full with smoke. But if I can turn myself invisible it will be worth it. Do you know all the money I can get? Millions!”

“Do not play with fire, Bernardo,” said Mama. “You really don’t know what you are getting yourself into. God protect you son, and I hope you will never regret it.”

“Regret it? Oh no-I only know that when the cat is fully cooked and taken out of the tin can the only thing left is to look for a bone in the form of a ‘Y’ between his ears. If I am lucky and find it, my whole life will change.”

“But you also have to disembowel him? Jesus, Mary, and Joseph! You are crazy, Bernardo. And tell me, what are you going to do with that bone?”

“That is the most important part. Once I find the bone I will be the most powerful man on earth. Every time I put it under my tongue I will become invisible. Can you imagine all the things that can be done when you are invisible?”

Bernardo’s mind was not well. You could tell by the way he looked and his trembling hands. Mama felt sorry for the young man and decided to excuse herself. She was very sad and left him with these words: “Well Bernardo, I cannot make you change your mind, but I will ask God to help you and maybe before 12 o’clock tonight you will stop insisting to play with the ‘unknown’ before is too late.”

Mama and I went inside the house but watched Bernardo through a window. He was so happy, jumping from one side of the road to another, talking to himself.

“That boy is not well. God protect him from that madness.”

That was the last commentary from my mother before she closed the window.

A few days later Mama was talking about Bernardo’s absence. She was so accustomed to his afternoon visits that her curiosity took over. It bothered her not knowing the cause of his absence. And she did not lose any time finding out. She crossed around the backyard and gave a call to a neighbor who was hanging something on her clothesline.

“Hey! The young man of the rented room in the back of the house, Bernardo. I haven’t seen him for a few days. Have you seen him?”

“Really? And you said you haven’t seen him since then?”

“No, we haven’t. Though something strange happened that night. I think we should find out.”

“It did? What happened-tell me!”

“Well, I don’t know if it is important or not, but we believe we heard a cat screaming desperately-and that was something to raise your hair behind your neck! Neither my husband nor I dared to go out in such a late hour to find out.”

Mama was so scared that she trembled. Bernardo had finished his experiment from beginning to end. But where was he? Something must have happened and the curiosity was killing her. She shared with her neighbor part of Bernardo’s confessions. Both decided to go toward the back of the house and knock at the door.

But all was in vain. It was tightly closed from the inside with a thick wood plank, and so was the only window. Mama and her neighbor decided to call the pertinent authorities to look over the situation.

When the police arrived with a judicial order, they demolished the old door and got inside. The humble place had a smelly stench and a disgusting look. At the center of the small room there was a very old table; a decomposed and crumbled black cat lay there, disemboweled.

Nearby was a hearth full of ashes and the remains of burnt logs. In a corner there was a miserable bed, covered with an old shredded sheet. A dirty shirt and a pair of pants hung on two rusty nails on the wall. But Bernardo was nowhere.

The case was never accounted for by the police. Mama kept her secret and she never shared her full knowledge with any-body. For many years, she wondered to herself about the strange disappearance of the man who used to sit on our veranda, dreaming of fabulous riches.

Where is Bernardo? Perhaps he really became invisible, or perhaps he disappeared into the “unknown” forever and ever. What do you think?