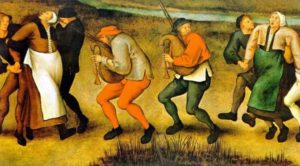 The dancing plague (or dance epidemic) of 1518 was a case of dancing mania that occurred in Strasbourg, Alsace (now modern-day France), in the Holy Roman Empire in July 1518.

Around 400 people took to dancing for days without rest and, over the period of about one month, some of those affected collapsed or even died of heart attack, stroke, or exhaustion.

The outbreak began in July 1518 when a woman, Frau Troffea, began to dance fervently in a street in Strasbourg. This lasted somewhere between four and six days. Within a week, 34 others had joined, and within a month, there were around 400 dancers, predominantly female.

Some of these people died from heart attacks, strokes, or exhaustion. One report indicates that, for a period, the plague killed around fifteen people per day. However, the sources of the city of Strasbourg at the time of the events did not mention the number of deaths, or even if there were fatalities.

Historical documents, including “physician notes, cathedral sermons, local and regional chronicles, and even notes issued by the Strasbourg city council” are clear that the victims danced. It is not known why these people danced, some even to their deaths.

As the dancing plague worsened, concerned nobles sought the advice of local physicians, who ruled out astrological and supernatural causes, instead, announcing that the plague was a “natural disease” caused by “hot blood”.

However, instead of prescribing bleeding, authorities encouraged more dancing, in part by opening two guildhalls and a grain market, and even constructing a wooden stage.

The authorities did this because they believed that the dancers would recover only if they danced continuously night and day. To increase the effectiveness of the cure, authorities even paid for musicians to keep the afflicted moving.

The strategy was a disaster; after those policies were applied the illness underwent a dramatic growth. Performing dances in more public spaces facilitated the spread of the psychic “contagion”.

Historian John Waller stated that a marathon runner could not have lasted the intense workout that these men and women did hundreds of years ago.

Modern theories include food-poisoning caused by the toxic and psychoactive chemical products of ergot fungi, which grows commonly on grains in the wheat family (such as rye) that was used for baking bread.

Ergotamine is the main psychoactive product of ergot fungi; it is structurally related to the drug lysergic acid diethylamide (LSD-25), and is the substance from which LSD-25 was originally synthesized.

However, John Waller in The Lancet argues that “this theory does not seem tenable, since it is unlikely that those poisoned by ergot could have danced for days at a time. Nor would so many people have reacted to its psychotropic chemicals in the same way.

The ergotism theory also fails to explain why virtually every outbreak occurred somewhere along the Rhine and Moselle rivers, areas linked by water but with quite different climates and crops”.

Waller speculates that the dancing was “stress-induced psychosis” on a mass level, since the region where the people danced was riddled with starvation and disease, and the inhabitants tended to be superstitious.

This could have been a florid example of psychogenic movement disorder happening in mass hysteria or mass psychogenic illness, which involves many individuals—small groups to almost 1,000 people—suddenly exhibiting the same bizarre behavior.

The behavior spreads rapidly and broadly in an epidemic pattern. The sufferers are primarily adolescent females. This kind of comportment could have been caused by the elevated levels of psychological stress, i.e. the despair caused by the ruthless years (even by the rough standards of the Middle Ages) the people of Alsace were suffering.

However, not everyone agrees with this theory. There are a lot of questions left to be answered: why only women danced, why such epidemics do not recur in poor countries and many others.