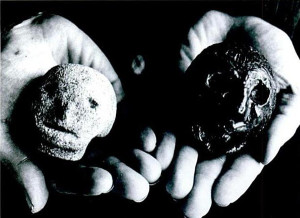 The discovery of 2 hand-hewn stoneheads in a garden in Hexham looked like to worth no particular attention at the beginning. But then a nightmare began because the heads were likely the primary reason for paranormal phenomena and caused the frightful appearance of a werewolf-man.

Hexham is a borough in the valley of the Tyne, 32 kilometers far from Newcastle-upon-Tyne. Here, one morning in February 1972, the 11 year old Colin Robson weeded the garden behind the house of his parents. In doing so, he found a rounded stone in the size of a tennis ball with a strange lead on one side. When he gotten rid of the earth, he noticed rough carven human traits on the stone; the lead was actually the throat.

Full of happiness he called his younger brother Leslie to come. Together, the both boys continued to search and soon Leslie found a second head.

The stones, which were called the Hexham-heads, represent two different types. The first was similar to a skull and seemed to bear male traits; it was called “boy”. The stone was of a greenish grey and glittered with quartz crystals. It was very heavy, heavier than cement or concrete. The hair seemed to run in stripes from front to back. The other head, the “girl” was similar to a witch. It had wild pop-eyes and the hair was tied back to some knot. In the hair, traces of yellow and red color could be found.

After they have dug up the heads, the boys took them into the house. Therefore, the entire tragedy started. The heads turned round without reason, objects broke to pieces without evident cause. When the mattress of one of the two daughters of the Robsons was dotted with broken glass, the girls moved out of the room. In the meantime, a mysterious flower bloomed at Christmas exactly on that spot, where the heads were found. Besides, a strange light was glowing there.

It could be stated that the events at the Robsons have nothing to do with the appearance of the heads but deals with poltergeist-phenomena, which has been evoked by the adolescent children of the Robsons. Nevertheless, the neighbour of the Robsons, Ellen Dodd, had such a frightful experience, that cannot be explained easily. Later on, Mrs. Dodd said a being on all fours had carefully touched her at the legs. It has been half man, half sheep. Mrs. Robson remembered that in the same night she has heard a cracking sound and screams next door. Her neighbours told her that those sounds derived from a being that looked like a werewolf.

Dr. Anne Ross, a significant expert of the Celtic culture, stated that the heads would be approximately 1800 years old and were originally used during Celtic head-rituals. The apparitions stopped after the heads has left the house.

In 1972, the story took a new turn, when truck driver Desmond Craigie stated that the “Celtic” heads were only 16 years old and that he has manufactured them as toys for his daughter Nancy. Astonishingly, the age of the heads could not be determined even with the help of a scientific analysis.

When the heads really stem from the Celtic epoch, it can be easily imagined that an ancient curse weighs on them. But when they are not old, how can it be explained that they evoke paranormal phenomena? It exists a theory that mineral art products can store visual pictures of humans from which they have been created. It is supposed that localities and objects can take up information that can cause particular phenomena.

The scientist Dr. Robins was also interested in the reports about the sounds that are said to have been occured in connection with the heads. He pointed to a parallel of a being from the ancient Nordic mythology, the “Wulver”. He was powerful and dangerous but benevolent towards human people as long as they did not provoke him. Dr. Robins was so fascinated by the heads that he intended to take them home with him. When he laid them in his car to drive home and turned the ignition key, all electronical appliances on the dashboard failed. He took a look at the heads and commanded them: “Stop with that!” – and the car started.

The present whereabouts of the Hexham-heads are not known. But it cannot be doubted that they really caused the phenomena which are similar to those that are usually attributed to poltergeists. They functioned in some form as a trigger. But why? This leads to the question of their age. Are they of Celtic origin as Dr. Ross has stated or have they been recently manufactured in 1956 by a Hexham-inhabitant for his daughter? The theory of Dr. Robins says: When an object is in the position to cause poltergeist-phenomena, so it does not depend on who has manufactured it but “where” it had been manufactured.

The Home Of Ghosts: Penitentiary Chapel