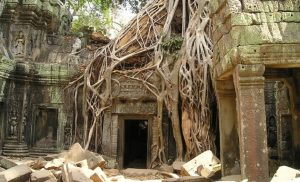 You will not envy the group of archaeologists who found the ancient city of the Aztecs: instead of countless treasures, they stumbled upon a terrible disease, which in the past was considered a real curse of the gods because of the impossibility of treatment.

In 2011, a research group in the jungle of Honduras discovered the “city of the monkey god.” Ruins were found in the Mosquito region. Scientists have long been looking for this settlement, since they had heard about its treasures.

Since 1927, information appeared on the whereabouts of the city, but only in 2011, experts decided to act. The search led researchers to a settlement that was abandoned in 1520 due to a terrible disease. The Aztecs were forced to leave, no one else returned to the settlement.

As it turned out, there is parasitic leishmaniasis on the territory. The parasite enters the body from malaria mosquitoes. The parasite makes its way to the nose and begins to eat face.

As a result, after a while, the nose falls out, then the lips, and then the whole face becomes one big wound that does not heal.

Medicine today is able to treat many diseases if they are not neglected. Scientists were saved, not like the Aztecs, who died from the “curse of God.”