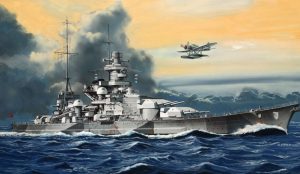 Adolf Hitler was very proud of the Scharnhorst, a war ship carefully built to defeat Allied navies. Something was wrong with the vessel – she was cursed.

The history of Adolph Hitler’s vanity and delight, the Scharnhorst, first appeared to be cursed when she was being constructed. Scientists and technologists used all of their expertise to plan building the battleship.

When the construction was only two-thirds finished, the enormous ship rolled over on her side, crushing to death sixty-one workmen and harming more than one hundred others.

The Launching of the Scharnhorst

The day of her launching was supposed to be a grand occasion. The German top cops, Hitler, Himmler, Goering, von Schirach, Hess, and Admiral Doenitz arrived, but the ship, the guest of honor, was missing! She launched herself the night before.

The Scharnhorst was grounded on a pair of barges that were in her way. To cover up, the embarrassment, officials said that she was launched covertly by a top secret launching system the night before.

During the German seizure of Danzig, one of her big guns exploded, killing nine sailors and a faulty air system suffocated twelve more men. The siege of Oslo was not without tragedy. She caught fire and had to be towed to safety by the Gneisenau.

She was forced to limp home, dodging British bombers, as she travelled to the Elbe River basin. Her radar failed, triggering her to collide with the biggest ocean liner, the SS Bremen, and the watchman who sounded the alarm died in the crash. The Brennan sank and was bombed by British planes.

The Demise of the Battleship

The Scharnhorst was tied up for repairs when Hitler’s power began to fade. Many of his battleships had been torpedoed, so he sent her into the fray again.

She glided down the Elbe and, covered by the darkness of night, made her way to the coast of Norway, where she ran into a crippled British patrol boat.

The collision alerted the British fleet as to where she was. The battleship was built with enough speed to outrun any other one in her class, but when the British commander took a chance and fired at her, broadside, from sixteen thousand yards, the Scharnhorst swung around into tons of high explosives.

Mortally injured, she was an easy target to be sunk by the British ships and finally went down.

Only thirty-six, out of nineteen hundred men, survived. Two of the men who managed to reach the shore were found dead months later. They died from the explosion of the ship’s emergency oil heater.

Can Objects be Cursed?

His theory is that objects could be affected by a Gestalt, which, by his definition, is a collective psychological entity, a Group Soul, exists on another plane. When objects are treated with disregard, the Gestalt is released in the form of a curse.

Serious paranormal researchers and investigators keep open minds about curses and agree that something exists beyond known scientific laws.

Theories try to explain this, but the cause is, for the present, unknown