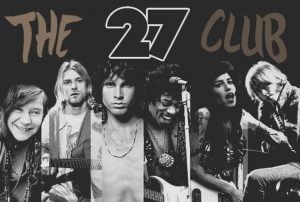 Many musicians have lost their lives at age 27, leading to a popular belief that age 27 is cursed for many.

Winehouse was well known in the media for her battle against drugs and alcohol and she even wrote about it in her famous release, ‘Rehab’. But in January 2011, she lost this battle and died at a young age.

Something else that is very interesting about all of these influential musicians who died at age 27 is that in most cases, they died mysteriously and there has never been any conclusive evidence as to how it happened.

And of course, this really gets people talking. The Brian Jones death for example was reopened by Police in 2009, 40 years after his death, as the status of these people keeps it a subject of conversation for many years.

The strange circumstances surrounding the deaths of those who have been labelled to have fallen to the curse of 27 has struck a chord with conspiracy theorists, who, as you can imagine, immediately started to notice the similarities and correlations.

One such conspiracy is in relation to the deaths of Jim Morrison and Brian Jones who were friends. Both artists died on the same date just two years from one another.

But are these just coincidences? There are in fact hundreds of musicians in this world, many of whom are famous throughout the world. At some point, two are bound to die on the same day, right? Some share birthdays, some even meet and end up having relationships with other celebrities who share their birthday. It’s just the way of the world.

Many say that the 27 club is related to the Devil. It is believed that Robert Johnson is where the curse began, and that Johnson made a pact with the devil in exchange for his fame and fortune.

This ended with his death at age 27, and it is believed the other artists have somehow been involved with the same curse and give up a long life in order to become famous and have everything that they could ever want.

What’s so special about 27?

First of all, the number 27 is the result of 3 cubed. And we all know the saying, 3 is the magic number. The number 27 also occurs very regularly around us – the Moon’s orbit is 27 days in length, there are 27 bones in the human hand, and this number is referred to in the Bible many times.

Could it be that the number 27 has some deep meaning behind it? Who knows. It will probably remain one of the many mysteries of life.