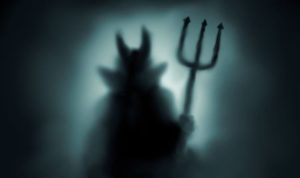 Jan Reynolds was a young tin miner who lived in Widecombe. He worked hard but played even harder, in the area he was known as a drinker, gambler and a womanizer. Sadly his lifestyle did not match his income and so he was always short of ‘coin’.

In an attempt to solve this problem Jan had sold his soul to the Devil in return for gold. The upturn in his fortune enabled the young miner to indulge even further in his passions and he became so engrossed that he conveniently forgot his satanic pact.

One Sunday morning a group of ‘church dodgers’ were having a few pints in the Tavistock Inn at Poundsgate. This was a regular venue for a Sunday because it was far enough away from Widecombe for the vicar to catch them.

This particular Sunday was hot, humid and sultry which meant the locals had a proper thirst on. The ale was flowing fast and furious and the landlady’s till was filling nicely.

Those sat near the window became aware of the sound of galloping hooves clattering down the road. The horse and rider slid to a halt outside the inn upon which a tall dark stranger dismounted and purposefully strode into the bar.

He was dressed from head to toe in black and had a menacing air about him. The rider stood and the bar and slowly surveyed the crowd of locals. The low murmur of conversation stopped and feet scuffled nervously on the floor.

Everybody was looking anywhere but at the stranger who continued to carefully examine each individual. The landlady edged up and asked the man what he would like to drink. A foaming tankard of ale was duely poured and a gold coin handed over.

Those near enough were amazed to see such a sum, this was not a rich men’s company. Those who stood even nearer were alarmed to hear a sizzling noise coming from the stranger’s throat as he quaffed his ale.

With one final look around the bar, the man in black finished his drink and strode out. The sound of galloping hooves could once again be heard speeding off towards Widecombe. One of the locals asked to see the gold strangers gold coin and so the landlady reached into the cash box.

To her surprise, she found only a few pennies and a pile of dry, withered leaves where she had put the golden guinea.

Whilst all this was happening, Jan Reynolds had decided to go to church over at Widecombe where he was hoping to catch the eye of a certain milk maid.

The vicar was not known for a short sermon and so to pass the time Jan was playing idly with a pack of cards. As the minutes dragged by his eyes became heavy and soon the young miner fell asleep. The vicar droned on and on until a sudden flash of lightning lit the church.

This was followed by a loud crack of thunder which announced the arrival of a terrible storm. Suddenly there was an enormous crash, dust and debris showered down from the roof and to everybody’s terror the Devil plummeted down into the church.

He strode over to where the sleeping figure of Jan Reynolds was and scooped him up. Amongst all this mayhem folks were confused, to say the least, some say that before he returned up to the tower the devil bashed Jan’s skull in, others say Satan simply carried him up to the tower.

Either way, the evil one went to his horse which he had tethered to one of the churches pinnacles, flung the miner across its neck, and then leaped on the animals back. With a spine chilling shriek, the Devil sped off with a hail of sparks and flames into the stormy sky. As the horse leaped into the air it tore off the pinnacle and sent it crashing down into the church.

The last anyone ever saw of Jan Reynolds was when they passed over the moor by the Birch tor mine, the Devil was holding the figure of the lad and the horse was climbing higher into the sky.

As the horse ascended four of the playing cards fell from Jan’s pocket and fluttered down to earth. When the cards hit the ground they left four imprints which serve as a warning to all potential ‘soul sellers’ and anyone who dared to play cards in church.