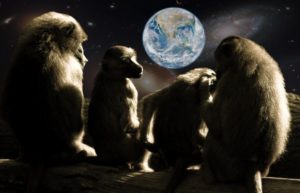 The hundredth monkey effect is a theory that suggests after a certain number of animals learn a given behavior, the effect spreads regardless of whether or not the creatures communicate from one another.

Is there a form of universal animal telepathy that allows the transmission of information from one population to another? Or is that whole idea just bananas? Curiously, when it was first proposed it was soon spotted in other species.

The theory goes like this: If you have two populations of monkeys living on islands near one another and one of them learns how to do something (the original observation was learning how to wash sweet potatoes) then it will have to teach others in its vicinity or wait for them to develop the skill on their own.

But as the information spreads virally through a population, soon other creatures miles away who have never interacted with the first population will begin manifesting the behavior themselves.

The apparent hundredth monkey effect is a generalized term that suggests a number must reach a certain threshold, but then becomes common knowledge for all creatures within a population even if they’ve never interacted with one another. Similar stories told of migrations of crows who started using lit cigarettes to fumigate their wings and delouse themselves.

However, the Hundredth Monkey effect has been called into question. Problems with the original experiment, such as the fact that a monkey may have contaminated the nearby island by swimming there (yes, apparently they can swim) and the fact that the sweet potatoes in question were not available beforehand has led some to question whether the effect should be tested again.

Still, there is another incredible phenomenon that does suggest the learning of a behavior can spread – as we call it today – virally.

In the world of the internet where information can spread at unimaginable speeds, we see this happening every day. If one of us learns something, we can pass this information to two people, then four, then sixteen, then by the end of a given week there is something millions might know that no one was aware of previously.

In its own way, this much observed effect is similar to the hundredth monkey effect. Unfortunately for us, it is also fairly easy to explain.

Is there a field of consciousness that surrounds all life and allows information to be transmitted quickly and at will? Are we all somehow connected in a vast noosphere of intelligence? Perhaps if it does not exist yet it will in a few years.

Let’s take the simple concepts of the internet and suggest that we have a technological means of transmitting information through a vast number of eager minds.

It’s a simple matter then to convert the means of transmission into an implant that can communicate wirelessly between human minds and very quickly we find that the idea may hold some foundation already – and be applied in the future.

Could we one day live in a world where thoughts and information are transmitted automatically and wirelessly? Is this where the thread of history the Internet has ends and something entirely new begins?