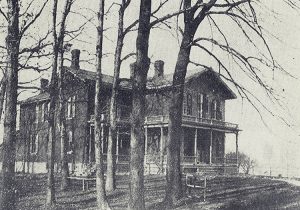 In 1864, Mary Lurancy Vennum was born near Watseka, Illinois. When she was 13 years old, something happened to her that would change her life forever. Her case is known as the Watseka Wonder.

The episodes were so serious that she often became unconscious while experiencing a fit. During these episodes, she became catatonic. However, her fits were no ordinary medical issue. What she saw while unconscious would be dubbed the Watseka Wonder.

After a time, Vennum began speaking while she lay unconscious. She told her parents that she was in heaven. She claimed to have seen angels, demons, and spirits of the dead. She even said that she had met with her brother and sister who had died.

Sometimes, she rose and walked through the house. On a few occasions, she stood up and ran, claiming that she was being chased by demons. Vennum never remembered the details of her visits when she eventually woke.

Vennum’s fits continued to worsen. She would often spend as much as 8 hours each day completely catatonic. Sometimes she had episodes as often as 12 times per day.

Doctors advised her parents to commit her to an insane asylum, convinced that only insanity could be the cause of such unusual symptoms. Instead, Vennum’s parents were convinced by a neighbor, Asa Roff, to consult a spiritist doctor, E. Winchester Stevens.

Stevens agreed to examine Vennum. After meeting with her several times, he noted that her character would change significantly after a fit. Before experiencing an episode, she would be sullen and morose. Afterward, she was joyous as she described her trips to heaven.

Stevens believed that Vennum was sometimes possessed by spirits she encountered in heaven, such as an old woman named Katrina Hogan and a young man named Willie Canning. She spoke in their voices, sometimes even in foreign languages, and described far away places in impressive detail. She regularly provided names of deceased people that she would have no reason to know of, stating that they had possessed her.

At one point, Vennum apparently allowed the spirit of Asa Roff’s daughter, Mary Roff, to possess her for 15 weeks. During this time Vennum recognized friends and members of the Roff family, items in their homes, and stories from Mary’s childhood. The family was so convinced of the possession that they allowed Vennum to live with them for several weeks.

According to Asa Roff, before her death Mary had experienced symptoms similar to those that Vennum was manifesting. Mary had eventually become violent, leading the family to commit her to the asylum where she later died. It was this experience that led Asa to beg Vennum’s family not to commit her.

During her time with the Roff’s, Vennum participated in numerous seances with grieving families who had heard of the Watseka Wonder. They used Vennum’s bizarre abilities to get in contact with their own deceased family members and gain closure.

E. Winchester Stevens was present to observe and examine Vennum through much of this time. Stevens’s examinations of Vennum would eventually be publicized in a book titled “The Watseka Wonder.” In this book, he stated that Vennum’s case was “the most remarkable case of spirit return and manifestation ever recorded in history.”

Many people were skeptical of Vennum’s story. Some believed that she had fallen in love with a member of the Roff family, and learned all she could so she could impersonate Mary and ingratiate herself with the family.

Psychologist Frank Sargent Hoffman believed that the Watseka Wonder was a hoax. Upon reviewing the case, he asserted that Vennum never displayed knowledge that couldn’t be gained through mundane methods. He believed that Vennum was highly suggestible, and had allowed herself to be convinced of the supernatural nature of her experiences.

Whether Hoffman was correct or not, the Watseka Wonder holds an important place in the history of Spiritism. Thanks to the work of E. Winchester Stevens, Vennum’s case became the first documented case of possession in America’s history.

This post was contributed by Slapped Ham. Slapped Ham is a website that’s been covering all things strange, mysterious and creepy for over 5 years. They have a Youtube channel with over one million subscribers and have been noted for their eerie, binge-worthy content.