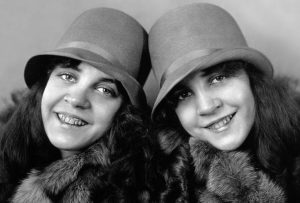 Daisy and Violet Hilton were born at 18 Riley Road, Brighton, England, on 5 February 1908, and the conjoined twins, were entertainers that were variously called or referred to as The Siamese Twins, The Hilton Sisters and The Brighton Twins or The Brighton Conjoined Twins. Doctors at the Sussex Medico-Chirurgical Society had considered separation, but unanimously decided against it as it was believed that the operation would certainly lead to the death of at least one of the twins. They noted that the twins were the first to be born in the UK conjoined and to survive for more than a few weeks.

The employer of their mother Kate Skinner, Mary Hilton, who helped in the childbirth, apparently saw commercial prospects in the twins, and effectively bought them from their mother and took them under her care. The girls first stayed above the Queen’s Arms pub in Brighton, but later moved to the Evening Star pub. According to the sisters’ autobiography, Mary Hilton with her husband and daughter kept the twins under strict control with physical abuse, forcing them to call her “Auntie Lou” and her husband “Sir”. They trained the girls in singing and dancing.

The sister first toured Britain in 1911 at the age of just 3, and then onto a tour through Germany, then Australia, then in 1916 to the US, where they remained, appearing in the United States sideshow, vaudeville and American burlesque circuits in the 1920s and 1930s. They were best known for their film appearances in Freaks and Chained for Life.

In true sideshow manner, their performance was accompanied by an imaginative “history”, bu the sisters controllers kept all the money that they earned. In 1926, Bob Hope formed an act called the Dancemedians with the sisters, who had a tap-dancing routine. When Mary Hilton died in Birmingham, Alabama, the girls were bequeathed to Mary’s daughter Edith Meyers, and Edith’s husband Meyer Meyers, a former balloon salesman. The couple took over management of the twins, but things didnt improve for them. Held mostly captive, the girls were beaten if they did not do as the Meyers wished. They kept the twins from public view for a while and trained them in jazz music, Violet was a skilled saxophonist and Daisy a violinist. 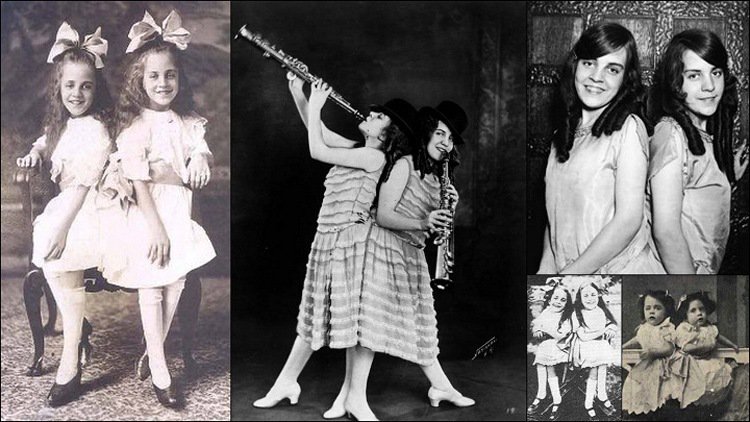 In 1931, the sisters sued their managers, gaining freedom from their contract and $100,000 in damages.They went into vaudeville as “The Hilton Sisters’ Revue”. Daisy dyed her hair blonde and they began to wear different outfits so as to be distinguishable. After vaudeville lost popularity, the sisters performed at burlesque venues.

Shortly after gaining independence from the Meyers, the Hiltons sailed to the UK on the Berengaria in December 1932. They spent most of 1933 in the UK, returning to the US in October 1933.
Violet began a relationship with musician Maurice Lambert, and they applied in 21 states for a marriage license, but it without success, and the relationship wasnt to last.

After appearing in the 1932 film Freaks, the sisters popularity faded, and they struggled to make a living in show business.

In 1936 Violet married gay actor James Moore as a publicity stunt, and although the marriage lasted ten years on paper, it was eventually annulled. In 1941 sister Daisy married Harold Estep, better known as dancer Buddy Sawyer, who was also gay. The marriage lasted ten days. In 1951 they starred in a second film, Chained for Life, a film loosely based on their lives.

The Hiltons sisters last public appearance was at a drive-in in 1961 in Charlotte, North Carolina. Their tour manager abandoned them there, and with no means of transportation or income, they were forced to take a job in a nearby grocery store, where they worked for the rest of their lives.

On 4 January 1969, after they failed to report to work, their boss called the police. The twins were found dead in their home, victims of the Hong Kong flu. According to a forensic investigation, Daisy died first, Violet died between two and four days later. They were buried in Forest Lawn West Cemetery in Charlotte, North Carolina.