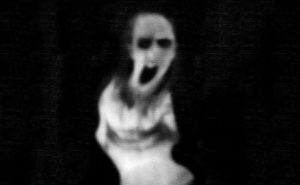 Anomalien.com reader Simon shares his story about an encounter with the unexplainable.

This incident happened some time in July, 2007 at a certain building in Makati City, Philippines. I am telling this story on behalf of those who were with me that night.

I used to work as a call center agent way back then. We were on a graveyard shift so our training started at around 9 in the evening. Together with more or less 20 co-trainees, we set ourselves to the upcoming training exam that night.

Suddenly, Jake, who was one of my co-trainees, stopped answering and told me he heard someone crying. I didn’t mind him at all for I was busy answering the questions. After a minute or two, there it was.

We all started hearing weird sounds as if someone was crying right next to the divider located in one corner of the room near the door. I never believed in ghosts before and I have always wanted to see one to satisfy my curiosity — until that night when it happened.

The crying got louder and we all heard the sound of a crying lady. The divider was long and high enough that none of us can see what was going on behind it.

It was like a cry filled with mourning and anger, as if she was beaten by someone. We looked at each other in the room, including our trainer, just to make sure that we were hearing the same thing and, in fact, we all did. One of my co-trainees managed to check the back of it, but to his surprise there was none.

The crying lasted for about 45 seconds then it stopped. As we finished discussing our answers, one of the girls (who came from the bathroom near the entrance outside, three rooms apart from our training room) rushed in and told everyone that someone was trying to open the cubicle while she was inside.

As she described it, it was like some crazy lady was bumping the cubicle door from outside. She started to scream. After a few seconds, the bumping stopped according to her.

It was already morning when we asked the security (who have been working for 20 years) about the incident. He told us that a few years back inside the present training room, a lady worker committed suicide by stabbing herself to death.

The dead body was discovered the next day and it was filled with blood. Whatever reason for the suicide, no one knew. For as long as no one bothers to know, perhaps the crying lady will continue to haunt that 9F of the building.

The Sinister Story Of Basement Room