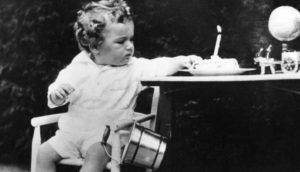 On the night of March 1, 1932 the baby of Charles and Anne Lindbergh was taken from his nursery. Charles Jr. was only 20 months old at the time.

In the hours that followed, the state police scoured the mansion in the tiny town of East Amwell, New Jersey searching for clues. What they found was a ransom note left by the kidnapper demanding $50,000 for the safe return of the child, a discarded homemade ladder, and a chisel. The kidnapper left no fingerprints.

The Lindberghs received numerous letters by people claiming to be go-betweens with the kidnapper. One man by the name of Dr. John Condon claimed to have established contact with the kidnapper and a deal was set up.

At a cemetery in the Bronx, Condon paid the supposed kidnapper $50,000 in marked gold certificates in exchange for the information that Charles Jr. was in a boat off the Massachusetts coast. 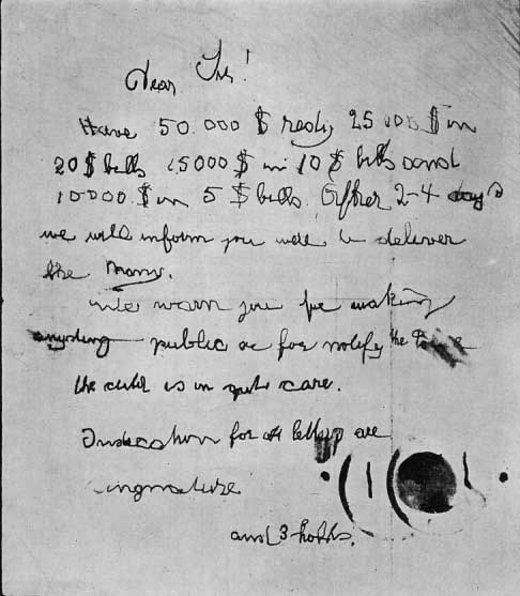 After two months of desperate searching by Charles Lindbergh and the police, the tiny remains of Charles Jr. were found only a few miles from the Lindbergh home.

The boy died from severe blows to the head, many believed to have been caused by a fall from the makeshift ladder the kidnapper had used to reach the second story nursery.

It took two years to track down the marked ransom money. They led to a German immigrant by the name of Bruno Richard Hauptmann, a German born Bronx carpenter.

$14,000 of the ransom money was found in his garage and a board cut from his attic floor was used in the homemade ladder. Hauptmann declared his innocence of the crime, claiming that Isidor Fisch, a fur dealer he knew who had fled to Germany and died there, left the ransom money in the garage.

The kidnapping and murder of the Lindbergh baby to this day has been considered the crime of the century. Often compared in popularity to the O.J. Simpson trial, the press flooded Flemington, NJ during the trial of Bruno Richard Hauptmann.

It was unheard of that someone would dare to kidnap and murder the son of the world’s greatest hero – the man who flew the first solo flight across the Atlantic in 1927.

Bruno Richard Hauptmann was the perfect criminal – few doubted his guilt. He was an illegal German immigrant with a criminal past and widespread World War propaganda referred to Germans as “Huns” and “Baby Killers.” 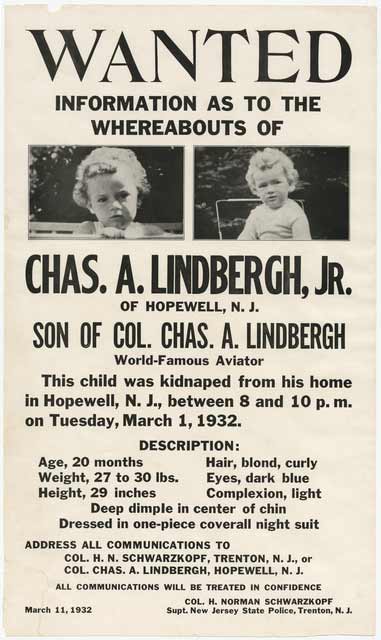 During the trial the evidence against him, including possession of the marked ransom money, the board taken from his home to create the homemade ladder, and seven handwriting experts who said Hauptmann’s handwriting matched the ransom note, was enough to convince the jury of his guilt.

After eleven hours of deliberation, all twelve members of the jury reached a unanimous verdict: guilty. Bruno Richard Hauptmann went to the electric chair at Trenton State Prison on April 2, 1936, continuing to claim his innocence of the crime.

If a man was found guilty, convicted, and executed of the Lindbergh baby kidnapping and murder why is this case considered unsolved to this day? Many believe that because Hauptmann was offered life imprisonment if he confessed, he was in fact an innocent man. What guilty man would not confess to save his life?

Other speculations have arisen from several individuals who have come forward claming to be the Lindbergh baby. One man, naming himself Charles Lindbergh III, said that he discovered his true identity through hypnosis and upon visiting the Lindbergh estate, remembered specific details of the kidnapping.

After numerous attempts at contact, Anne Morrow Lindbergh refused to meet with the man.

Hauptmann’s Isidor Fisch story of the German fur dealer who left the money in his garage and fled to Germany and subsequently died while abroad, leaves room for one to wonder if he was the actual perpetrator of the crime.

Two law enforcement officials wrote a book in 1994 declaring that Charles Lindbergh himself, dropped the child from the ladder by accident while attempting to play a practical joke on his family. Other theories have involved the older sister of Anne Lindbergh, insane with jealousy over her sister’s marriage to Charles, killed the child.

Anna Hauptmann, the wife of Bruno Richard Hauptmann, fought till her death in 1994 at the age of 95 for her husband’s name to be cleared of the crime. From the moment the police arrested her husband, she declared that the night of the kidnapping he had spent the evening with her in their Bronx home.

Unfortunately, her alibi was not enough to clear her husband of the crime. Anna’s lawyer Mr. Bryan, whom she had pleaded to for help in 1981 to clear her husbands name, said that “she used to talk about when she died, she would go to be with Richard.

But, she said, ‘I have a job to do here first. Once this is done, I’ll die and go be with Richard.’ So I have to believe that she is with Richard today.” Anna never remarried and amazingly died on the 69th year anniversary of her marriage.

Whether Bruno Richard Hauptmann was wrong convicted and executed for the kidnapping and murder of the Charles Lindbergh Jr. remains to be told. If Hauptmann was innocent, his wife’s lifelong crusade for the exoneration of her husband’s guilt deserves to be realized. The Crime of the Century debate continues with the hope that some day the truth will be uncovered.