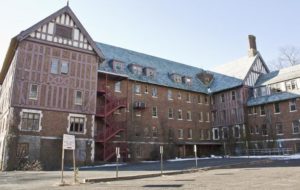 The Slaughterhouse is located on land, which used to be a farm, but was long ago incorporated into the property of the nearby Marlboro Psychiatric Hospital. How this land became hospital property is where this chilling tale begins.

Apparently there used to be a farmer named Mr. Allen who once worked the land, raised and slaughtered livestock there, and generally lead the life of a normal, rural New Jersey farmer. His family, I’ve been told, had owned and farmed the expansive tract of land for generations.

Then, one day the State came along and seized his land, telling him that they needed it for the mental institution, and that they had the authority to take it under their right of eminent domain. So they forced the farmer off of his own property, and began using the fields that he had cultivated to grow food to feed the asylum’s inmates.

Naturally, the farmer was furious, and did not vacate his property without a fight. He would often be seen wandering the fields he once worked, hollering threats and cursing at any hospital employees who came into his sight.

After hospital officials padlocked his house, he would repeatedly break in and continue to live there. When they called the police on him, the authorities had to drag the farmer away kicking and screaming. In a rage he vowed revenge against the hospital staff, and anyone else who dared trespass on his land.

Eventually, out of sheer anger and frustration, the farmer went completely insane. Then, in an ironic twist of fate, Mr. Allen was committed to the very mental institution, which he so despised and had sworn vengeance against.

As the story goes, the farmer spent many years at the asylum, keeping pretty much to himself. After a while, the aging Mr. Allen seemed to no longer be a threat to himself or anyone else. He had even gained enough of the trust and confidence of the orderlies to be allowed to join inmate work details outside the asylum’s walls.

Being a farmer by trade, it was not surprising to any of the officials at the hospital that he volunteered for duties in the institution’s gardens and greenhouses, and he even tended to the institution’s livestock.

Then one day, after working in the same fields, which he had once owned, the old farmer was nowhere to be found. The overseers rounded up all of the inmates to go back to the asylum, and Mr. Allen was just gone. A massive manhunt ensued, but after several weeks of searching, there was still no sign of him.

It was as if he had just been absorbed back into the landscape that he was once so much a part of. Now at this point in the story you might be thinking “good for him, he sure showed them.” But the legend doesn’t end here, in fact it is really just beginning. You see, apparently farmer Allen had never really forgotten what the State had done to him, nor had he forgiven them for stealing his farm.

Several weeks had passed since the old farmer had made his escape, and things around the asylum grounds had pretty much gone back to normal. Then people started to report hearing horrible animal noises coming from the Slaughterhouse late at night.

Witnesses said that the unearthly racket sounded like the death squeals of pigs being butchered. Although people at the hospital were used to hearing these noises during the day when the Slaughterhouse was operating, it was quite unusual to hear them at night when no one was supposed to be there.

Patients were starting to become disturbed due to the ghastly sounds, and many inmates had to be restrained or sedated at night to keep them from totally freaking out.

Although the hospital sent police out to investigate the Slaughterhouse, no one was ever found trespassing. However, it was soon discovered that some of the farm animals were missing. Then one day something happened that would change the course of everything at the institution forever.

Workers arriving at the Slaughterhouse early one morning were shocked when they entered the building to find the carcasses of various pigs, sheep, and calves strewn around the killing room floor. To make the gruesome discovery seem even eerier, the walls were smeared with the blood of the animals. Scrawled across the white brick walls were warnings like “I SEE YOU” and “TONIGHT ALL WILL DIE.”

That evening the blood-curdling squeals of dying pigs once again echoed over the fields of Marlboro, yet no call was made to police from the night watchman, so everyone at the asylum felt confident that all was well.

The next morning all seemed quiet and normal as the butchers approached the old Slaughterhouse for another day at work. There were no dead animals laying around, and no new bloody graffiti, but there was no security guard to be found anywhere either.

The men called for him, but there was no answer. Then, one of them saw something unusual – a small stream of blood, which ran across the killing room floor, then trickled down the drain in the middle of the room. The men followed the tiny red river into the next room, then traced it right under the huge steel door of the meat freezer, which was still locked.

We can only imagine what went through these men’s minds when they swung back that enormous door and caught their first glimpse of the grisly spectacle within. There, hanging by a hook from an overhead meat rack, was the blood-soaked body of the night watchman, still in uniform, frozen solid, with the decapitated head of a large pig where his own head used to reside. All around the wall of the freezer were writings on the walls – ramblings about greed, and pigs, and revenge.

Around town, the gruesome discovery was kept as quiet as possible, but in a relatively small community such as Marlboro it is hard to keep such a thing a secret for long. No one was ever convicted, or even charged with the crime, yet everybody around here had a pretty good idea who the killer was, though nobody will talk about it openly to this day.

The Marlboro Psychiatric Hospital has since closed its doors for good, and the old Slaughterhouse has stood abandoned and open to the elements ever since the whole incident took place. Crazy farmer Allen was never heard from again, though legend has it that he still roams his fields in search of trespassers.