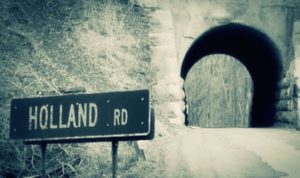 Jesse Hell was driving down Holland Road in Angola, taking advantage of the recent warm weather and clear skies. He and his best friend Paco thought nothing of it as they drove down the one-way street, careful not to steer off the narrow, barely existent paved road.

They were unperturbed by the thick, massive forest engulfing them as they cruised along in the pitch blackness of the night, watching as a train went by over an old stone bridge. They were aware that this street was supposedly haunted, but being paranormal activity “experts,” they knew better than to eagerly await things that go bump in the night.

That is, until the train went from full-speed to a dead halt instantly, without a sound, warning, or slowing down of any kind. In disbelief at the speed of such a stop, Hell turned his car around to get another picture, and it was already moving forward at full speed.

Holland Road, located off NY Route 5 in between the town of Angola and Evangola State Park, is more frequently known as “Pigman Road” and it has been at the forefront of Western New York folklore for decades.

Scores of high school students, ghost hunters, and area residents all have their own tales of headless spirits, photographic and audiotape abnormalities, and unusual activity emanating from this mile-long street. With an alluring mix of historical background regarding a train accident and urban legends about a pork-crazed serial killer, Pigman Road has become a rite of passage for anyone in the region wishing to access the world of the unknown.

The eerie feel of this location stems from a ghastly tale known as the “Angola Horror.” It was near the train tracks on Pigman Road where tragedy struck on December 18, 1867. A night just like any other turned into what would be the single deadliest railroad accident in Erie County history. Fifty people lost their lives.

The tragedy unfolded as a six-car passenger train was making its way eastbound to Buffalo and was approaching a bridge. A rear coach’s axle loosened enough to work itself off the tracks, pulling the car directly in front of it off its moorings as well.

The rear car broke loose and went plunging down the embankment as the car that was torn off in front of it was pulled to one side and tipped over. The full force of the rear coach skidding downward from high above caused it to break in half as the fire spread throughout. Nearly all of the passengers escaped this car, and only one person died. 40 others suffered severe burns, but the worst was yet to come.

The real damage was to the car that was pulled off and went rolling down the side of the embankment. The two massive coal stoves used for heating were loosened during the horrific commotion. The fiery contents scattered onto the helpless passengers who were caught in this death box, and soon the whole coach was engulfed by flames.

These passengers were not so lucky. Before the rescuers could be sent to this location, 50 people were burned to death, and only three managed to crawl their way out of the human incinerator in time to spare their lives.

These lonely three survived, and were left scarred for life, both physically and emotionally. The burns that covered their bodies were no match for the horrifying screams of their fellow passengers that forever lurked in their minds.

Jesse Hell, who did research before driving down Pigman Road, felt that the passengers of the 1867 train wreck still lingered in the area. He grew up in West Seneca, a neighboring town, and consequently heard the myths surrounding the pig-loving murderer who was said to live on the road, but he believes that spirits of the railroad were behind his freak train experience.

“I’ve been there before, and I got a slight chill at most, but mostly thought the scariest thing was the huge spiders in the bridge. But today was really scary because there was a story behind it, and history, not just a stupid story about a guy in a pig mask that kills people,” said Hell. “Trains just can’t go from dead stop to full speed that fast.”

The site in Angola known as Pigman Road is not for the faint of heart. It is here some 50 or 60 years ago that it is said a dangerous killer supposedly lurked in the shadows, keeping his distance from society.

Some say he might have been a butcher with sharp cleavers to chop off the bodies of animals, but he allegedly received the nickname Pigman because he routinely placed the heads of pigs on stakes throughout his yard, to keep others away.

Legend has it that one night Pigman was extremely busy, and in order to be left alone, he put the heads of three pigs on stakes at the entrance to his house, in between the two one-lane bridges. It was on that night that he received some unexpected visitors. Three young teenage boys decided it would be fun to go up to the Pigman’s house and bother him, not knowing what lay ahead.

During the course of the night, the Pigman caught these boys and decided once and for all to scare off anyone who ever thought of trespassing. Pigman decapitated each boy one by one, making the others watch and wait so they knew what was to come.

After he completed this bloody task, he put the three heads of the boys on stakes, forever cementing his reputation as a killer and a butcher. After this night, the mysterious man was never seen again, and to this day, no one quite knows whatever happened to the one they called Pigman.

Joe, a police dispatcher from the Evans Police Department which oversees activity on Pigman Road, refused to give his last name in connection with this article. He is convinced that supernatural activity exists at the graffiti-filled train’s bridge. Although it is frequented often, with each visitor partaking in personal rituals, the officer declined to elaborate on any specific happenings in the mysterious location.

“People go there all the time, but I can’t tell you what goes on there—it’s a secret,” said Joe. “I’ve lived here for 40 years, and there absolutely is a Pigman,” he added vehemently.

Mike Saad, a junior at UB, had a bone-chilling experience in Angola that has prevented him from returning. One day, the Lancaster native decided to check out the haunted site, having heard about it from friends and neighbors. He went with a lady friend, hoping to impress her with his bravery and calm demeanor.

When they reached the bridge with a graffiti painted warning reading “Pigman raped me here,” they got out of the car and started walking the train tracks. They heard squealing noises, like those of a hungry pig, and turned around to find the cause of the sound.

The high school students found no explanation, and only heard more squealing, so they scrambled back into the safe haven of their vehicles as soon as possible, and drove home with the windows shut and door locked for what seemed to be the longest half hour of their lives.

Mike Saad learned from his experience trying to learn about the legend of Pigman. “Pigman is more than just a ghost,” said Saad, with a certain tremble in his voice. “Pigman is real.”

Forest of Stones: The Mysterious Carnac Stones of France