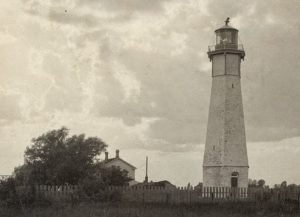 Serving as a marine signal on the Great Lakes since the 1808, the Gibraltar Point Lighthouse in Toronto is the site of an unsolved mystery.

Located on the southwestern tip of the Toronto Islands, this lighthouse is constructed of limestone and is built in a hexagon shape. Only 2 other lighthouses in Canada are built with a hexagon base.

The original tower built in 1808 stood 52 feet tall and was equipped with a stationary white lamp. In 1932, the tower was built up to 82 feet and a revolving white light was installed which was powered by oil and then coal.

When the lighthouse was hooked up to electricity in 1916, an electric flashing light was installed. In 1958, the beacon was placed on a steel tower and the lighthouse was given to the Toronto Metropolitan Parks Department. Renovated in 1961, the lighthouse is a favorite tourist attraction on Toronto Island.

John Paul Rademuller, the first lighthouse keeper, was known to brew his own beer using the recipe from his native Germany and many soldiers from Fort York would cross the harbor during their off-duty hours in order to get a drink from the Gibraltar Point Lighthouse.

Rademuller was well known as a bootlegger and it was suspected that he smuggled whiskey from the United States. Unfortunately, his beer was the cause of his demise.

He was murdered on January 2nd, 1815, and it is believed Rademuller was killed by three drunken soldiers who had traveled over from Fort York to get beer.

The story goes that Rademuller refused to serve beer to the soldiers so they beat him and dragged him up to the top of the lighthouse. Then they threw him off the ledge. The soldiers cut his dead body into pieces and buried his remains in several places along the island.

Almost eighty years later, lighthouse keeper George Durnan discovered pieces of a coffin buried in the sand on Toronto Island and part of a human jawbone. Because Toronto Island was also a burial ground for aboriginal people, it has not been proved that the jawbone belongs to John Paul Rademuller.

Visitors to the lighthouse have seen the apparition of a man wandering around the grounds as if he is searching for something. It is believed that it is Rademuller looking for his limbs.

On some nights, there are sounds of moaning and unexplained mist forming. Within the Gibraltar Point Lighthouse tower, thumping and banging noises or strange echoes have been heard.

There are some accounts of orb sightings and noises of feet going up the stairs and the sound of something being dragged.

At the lighthouse, there is a plaque that tells the story of the murder and states that the site may be haunted.