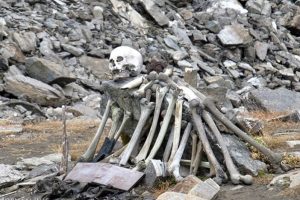 Roopkund Lake may look like any other mountain lake in the region at a glance, but if you walk closer, its icy surface conceals hundreds of people’s skeletal remains.

Who all these people were and how they got there continued a topic of discussion among researchers for a long time, with some theorizing that an ancient disaster might be to blame.

However, a new research involving an assessment of 38 of the skeletons disclosed that these individuals originated from several separate communities that arrived in the region over 1,000 years.

“Through the use of biomolecular analyses, such as ancient DNA, stable isotope dietary reconstruction, and radiocarbon dating, we discovered that the history of Roopkund Lake is more complex than we ever anticipated,” said Harvard Medical School geneticist David Reich.

Of those examined, 23 came from India, 14 came from Crete and Greece, while the one remaining came from Southeast Asia.

“We were extremely surprised by the genetics of the Roopkund skeletons,” said evolutionary biologist Eadaoin Harney from Harvard University.

“The presence of individuals with ancestries typically associated with the eastern Mediterranean suggests that Roopkund Lake was not just a site of local interest, but instead drew visitors from across the globe.”

However, what exactly drew these people to the lake over the centuries continues to remain a complete mystery.

Researchers may have figured out why Mars became uninhabited