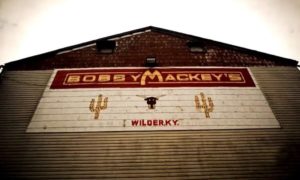 The history of Bobby Mackey’s Music World in Wilder, Kentucky, may indicate that because of the various uses of the property over the years, it is in fact the site of some interesting paranormal activity. Haunted or not Bobby Mackey’s has a very strange past.

The site where Bobby Mackey’s sits today was once the location of a slaughter-house. Built-in 1840, the slaughter-house operated until the 1890′s when it ceased all operations. It is believed that soon after the property was abandoned devil worshipers began performing ceremonies at the location.

The black magic rituals are said to have included sacrifices of animals and according to the legend, human children. It’s really not possible to verify the truth about the satanic activity at the Bobby Mackey property but it may be true.

On February 1, 1896, a woman named Pearl Bryan informed her family that she was going to Indianapolis to visit friends. Her destination however was in reality, Cincinnati.

The reason for Pearl Bryan misleading her family was the fact that she was five months pregnant and was going to Cincinnati to get an abortion. The father of Pearls unborn child was a man named Scott Jackson, a dental student, it was Jackson that arranged for Pearl to come to Cincinnati.

Unfortunately for Pearl, Jackson had not arranged for a doctor or midwife to perform the abortion, he planned do it himself. Jackson’s idea was to give Pearl a large dose of cocaine and hope that an abortion resulted, the effort failed and Jackson moved to his second plan.

Jackson next attempted to abort the fetus by using dental tools, this second very bloody attempt also failed to produce an abortion. A third attempt was made but by then Pearl was bleeding severely and Jackson’s plans changed.

Pearl Bryan was bleeding to death and Jackson decided that the only thing to do was to dispose of her. With that in mind, Jackson and an accomplice, Alonzo Walling, took Pearl a few miles across state lines into Fort Thomas, Kentucky.

Pearls headless body was discovered and Jackson and his cohort were charged with Pearls murder. The two men were found guilty and sentenced to death but before the sentence was carried out the murderers were offered a deal.

Pearl’s head had never been recovered and if Jackson and Walling would reveal its location to authorities their sentences would be changed to life in prison. The men refused to take the deal and were hanged on March 21, 1897.

The ghosts of Pearl Bryan, Scott Jackson and Alonzo Walling are all believed to haunt Bobby Mackey’s Music World and they are not alone. The site of the old slaughter-house has served several purposes over the years.

In the 1920′s it was a speak easy and gambling establishment where several people are believed to have been killed. Later on it was the site of the “Primrose” a casino and tavern. The owner of the “Primrose” was forced out by organized crime and committed suicide.

The Mob owned business became the “Latin Quarter” and again deaths were reported at the location. With the history of the site where Bobby Mackey’s Music World stands today maybe the most surprising thing would be if it wasn’t haunted.