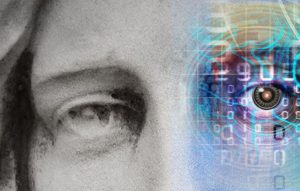 The argument over whether the universe has a creator, and who that might be, is among the oldest in human history.

But amid the raging arguments between believers and sceptics, one possibility has been almost ignored – the idea that the universe around us was created by people very much like ourselves, using devices not too dissimilar to those available to scientists today.

As with much else in modern physics, the idea involves particle acceleration, the kind of thing that goes on in the Large Hadron Collider in Switzerland.

Before the LHC began operating, a few alarmists worried that it might create a black hole which would destroy the world. That was never on the cards: although it is just possible that the device could generate an artificial black hole, it would be too small to swallow an atom, let alone the Earth.

However, to create a new universe would require a machine only slightly more powerful than the LHC – and there is every chance that our own universe may have been manufactured in this way.

This is possible for two reasons. First, black holes may – as science fiction aficionados will be well aware – act as gateways to other regions of space and time. Second, because of the curious fact that gravity has negative energy, it takes no energy to make a universe. Despite the colossal amount of energy contained in every atom of matter, it is precisely balanced by the negativity of gravity.

Black holes, moreover, are relatively easy to make. For any object, there is a critical radius, called the Schwarzschild radius, at which its mass will form a black hole. The Schwarzschild radius for the Sun is about two miles, 1/200,000th of its current width; for the Earth to become a black hole, it would have to be squeezed into a ball with a radius of one centimetre.

The black holes that could be created in a particle accelerator would be far smaller: tiny masses squeezed into incredibly tiny volumes. But because of gravity’s negative energy, it doesn’t matter how small such holes are: they still have the potential to inflate and expand in their own dimensions (rather than gobbling up our own).

Such expansion was precisely what our universe did in the Big Bang, when it suddenly exploded from a tiny clump of matter into a fully-fledged cosmos.

Alan Guth of the Massachusetts Institute of Technology first proposed the now widely accepted idea of cosmic inflation – that the starting point of the Big Bang was far smaller, and its expansion far more rapid, than had been assumed. He has investigated the technicalities of “the creation of universes in the laboratory”, and concluded that the laws of physics do, in principle, make it possible.

The big question is whether that has already happened – is our universe a designer universe? By this, I do not mean a God figure, an “intelligent designer” monitoring and shaping all aspects of life.

Evolution by natural selection, and all the other processes that produced our planet and the life on it, are sufficient to explain how we got to be the way we are, given the laws of physics that operate in our universe.

However, there is still scope for an intelligent designer of universes as a whole. Modern physics suggests that our universe is one of many, part of a “multiverse” where different regions of space and time may have different properties (the strength of gravity may be stronger in some and weaker in others).

If our universe was made by a technologically advanced civilisation in another part of the multiverse, the designer may have been responsible for the Big Bang, but nothing more.

If such designers make universes by manufacturing black holes – the only way to do it that we are aware of – there are three levels at which they might operate. The first is just to manufacture black holes, without influencing the laws of physics in the new universe.

Humanity is nearly at this level, which Gregory Benford’s novel Cosm puts in an entertaining context: an American researcher finds herself, after an explosion in a particle accelerator, with a new universe on her hands, the size of a baseball.

The second level, for a slightly more advanced civilisation, would involve nudging the properties of the baby universes in a certain direction. It might be possible to tweak the black holes in such a way that the force of gravity was a little stronger than in the parent universe, without the designers being able to say exactly how much stronger.

The third level, for a very advanced civilisation, would involve the ability to set precise parameters, thereby designing it in detail. An analogy would be with designer babies – instead of tinkering with DNA to get a perfect child, a scientists might tinker with the laws of physics to get a perfect universe.

Crucially, though, it would not be possible in any of these cases – even at the most advanced level – for the designers to interfere with the baby universes once they had formed. From the moment of its own Big Bang, each universe would be on its own.

This might sound far-fetched, but the startling thing about this theory is how likely it is to happen – and to have happened already. All that is required is that evolution occurs naturally in the multiverse until, in at least one universe, intelligence reaches roughly our level.

From that seed point, intelligent designers create enough universes suitable for evolution, which bud off their own universes, that universes like our own (in other words, suitable for intelligent life) proliferate rapidly, with “unintelligent” universes coming to represent a tiny fraction of the whole multiverse. It therefore becomes overwhelmingly likely that any given universe, our own included, would be designed rather than “natural”.

While the intelligence required to do the job may be (slightly) superior to ours, it is of a kind that is recognisably similar to our own, rather than that of an infinite and incomprehensible God.

And the most likely reason for such intelligence to make universes is the same for doing things like climbing mountains, or studying the nature of subatomic particles – because we can. A civilisation that has the technology to make baby universes would surely find the temptation irresistible.

And if the intelligences are anything like our own, there would be an overwhelming temptation at the higher levels of universe design to improve upon the results.

This idea provides the best resolution yet to the puzzle Albert Einstein used to raise, that “the most incomprehensible thing about the Universe is that it is comprehensible”. The universe is comprehensible to the human mind because it was designed, at least to some extent, by intelligent beings with minds similar to our own.

The great British astronomer Fred Hoyle suggested that the laws of physics were so uniquely conducive to human existence that the universe must be “a put-up job”. I believe he was right: the universe was indeed set up to provide a home for life, even if it evolved through a process of natural selection, with no need for outside interference. It isn’t that man was created in God’s image – rather that our universe was created, more or less, in the image of its designers.

Author: Dr. John Gribbi, a visiting fellow in Astronomy at the University of Sussex and author of ‘In Search of the Multiverse’