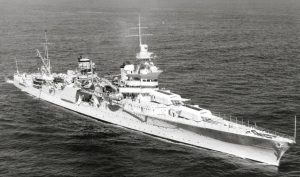 Many people have heard the USS Indianapolis story and may have never realized it. In Steven Spielberg’s terrifying 1975 movie Jaws the character named Quint gives a detailed five minute monologue about a horrible event that caused hundreds of sailors to be set adrift in a sea of hungry tiger sharks. “1,100 men went overboard. Sharks ate all but 316 before rescue arrived. They averaged six an hour.” – Quint

The massive capital ship sunk quickly in just 12 minutes taking 300 sailors down with it. The remaining 800 plus sailors were set afloat with no lifeboats or food and water. The sea was shark infested and by the time the survivors were found, four days later, insanity and hungry sharks had claimed all but 317 men.

Charles Butler McVay III, the ships captain, managed to survive the ordeal only to be court-martialed and convicted of “hazarding his ship by failing to zigzag.” The zigzag maneuver was basically a ‘Z’ pattern that ships sailed in the attempts to keep enemy submarines from having a straight torpedo shot.

The blame for this terrible tragedy was put solely onto the shoulders of this devoted, highly respected naval captain with an exemplary naval record. After a joke of a trial Mcvay’s career was over and his reputation ruined. The distraught families of the deceased sailors bombarded McVay with hateful letters. The guilt and shame mounted until McVay took his own life in 1968.

At first glance this awful case appears to be concluded. A ships captain disobeyed direct orders, his ship was sunk and hundreds of brave sailors perished horribly as a result. A court-martial punished the guilty party. Justice was served, case closed. If that were really true why would all of the surviving 317 men fight so diligently to prove the innocence of their captain and vow to have the court martial charges overturned even decades after his death? As with all conspiracies nothing is ever as it seems…

A detailed review of the USS Indianapolis case, from the beginning of its mission to the end of captain Mcvay’s trial, points out some puzzling and disturbing facts. Facts that show the US Navy was responsibility for the ships sinking and the death of every sailor that died as a result.

To begin with the McVay trial was a farce at best. The US Navy withheld vital intelligence information that proved McVay was not at fault and the McVay defense team was not allowed to prepare a defense.

The US Navy had decided early on that McVay would be the scapegoat for their screwups, but they had the problem of deciding what to charge him with. McVay was notified in advance that he would be charged with crimes, but it wasn’t until only four days before the actual trial that McVay was told what the exact charges were.

When the two charges were finally handed down, charge one of failing to issue orders to abandon ship in a timely fashion, and charge two, hazarding his vessel by failing to zigzag during good visibility, which he would finally be convicted on.

McVay’s defense team was denied a delay to develop his defense. McVay was also denied his choice of defense counsel. Instead, McVay was assigned counsel, selected by the very men that were court-martialing him.

During the trial it’s learned McVay’s exact orders were to follow a zigzag course except for in dense fog but at his discretion. The night of July 30th was cloudy. Eyewitness testimony verifies that the weather had moderate to heavy clouds at time.

In the cloudy weather and at the Captain’s “discretion” the zigzag pattern was stopped, as the orders stated. Military officers cannot be court-martialed for an error in judgment only for disobeying direct orders, which McVay did not.

During McVay’s military trial Mr. Hashimoto, the Japanese submarine captain, was brought in to testify. Mr. Hashimoto would testify that he would have hit the ship whether it was on a zigzag course or not. These details did not matter to a court martial board that had already decided the case, but these are not the most disturbing facts of the case.

No capital ship, unequipped with antisubmarine detection devices such as the Indianapolis, ever traveled between Guam and the Philippines without a destroyer escort throughout World War II. McVay repeatedly asked for a destroyer escort.

His requests were strangely denied. Four days before the USS Indianapolis was sunk another vessel the USS Underhill had been destroyed by a Japanese submarine in the same area. Captain McVay was never told this key information. Keep in mind McVay’s request for an escort was denied because the US Navy claimed there was no need for an escort. In fact, the Navy had informed McVay that there was “no confirmed submarine sightings” along his current path, a report that we now know to be completely false.

In 1993 with the freedom of information act the survivors of the USS Indianapolis learned just how deep the worm was burrowed. Declassified top-secret US Navy documents showed that the Navy was using a code-breaking system called ULTRA, which had allowed them to know that there was a Japanese submarine directly in McVay’s path.

Despite this information no warning was ever sent to McVay. US authorities also intercepted a message from the I-58 Japanese submarine to its headquarters in Japan informing them that it had sunk the USS Indianapolis.

This message was ignored and even after the USS Indianapolis failed to report in the Navy did not initiate a search. The USS Indianapolis had sent out three distress calls before it had sank. One of the distress signals was received at the US Naval base in the Philippines. It was also ignored.

No efforts were ever made to locate the ship or any of its possible survivors. The USS Indianapolis survivors were only discovered by a lucky accident when a bomber pilot flew over the struggling sailors.

After the discovery of the sinking the Navy withheld all information from the public for two weeks. This delay was to insure that press coverage on the story would be minimal. With the official end of World War II there would be little time away from the celebrations to investigate one sunken US ship.

When the specifics of the disaster are brought carefully to light it becomes clear that the Navy, and not Captain McVay, sealed the fate of the crew aboard the USS Indianapolis by knowing sending the ship, completely unprotected, into waters where they knew an enemy submarine was waiting. Furthermore, after the ship failed to report back at port, no search team was formed.

The Navy continued to ignore any evidence that showed the ship might have been sunk at sea. No one at the Navy attempted to find the missing ship and its crew of 1,196 men. After all the unnecessary death that the US Navy caused with its string of continuous blunders they would go that extra mile and kill one more man, Captain McVay.

The unjust court martial of captain McVay set into motion events in his life that would lead him to suicide.

UFO for American Presidents: All Leaders Knew About the Existence of UFOs