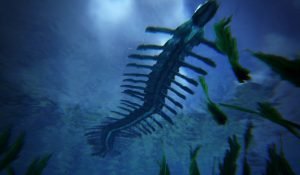 Fishermen during fishing periods in the South China Sea from time to time meet a mysterious creature, the reality of which official science is not ready to believe. The locals call it Con Rit.

Judging by numerous reports, this creature is blind and is guided by splashes of water. Hearing them, or feeling vibrations, the creature rapidly moves towards their source in sharp jerks.

Con Rit is very aggressive. Its body is made of segments of bony plates and it employs fish-like fins to swim. Initial research of the Con Rit was conducted by Dr. A. Krempf, director of the Oceanographic and Fisheries Service of Indo China, in the 1920’s.

If you believe the Vietnamese, then every year about a couple of dozen people die from his attack, and another hundred and a half remain crippled.

The sea monster actively uses its mouth with sharp, strong teeth. It is noteworthy that the teeth of the creature are represented by a kind of beak, like those of squids or octopuses. According to some reports, Con Rit is capable of releasing jets of hot water, practically boiling water.

Some researchers believe in the existence of such a creature in the South China Sea. The first mention of a huge predatory worm appears in the 17th century.

The first person to encounter Con Rit was the fisherman Wuy Li. He was fishing and in his nets was a four-meter (in some sources – six-meter) worm. Once in the net, the animal began to splash boiling water in all directions and wriggle until it broke the trap and ran back into the water.

Dr. Kremph interviewed an eyewitness who reportedly touched a beached Con Rit in 1833. The first carcass found by Tran Van Con in 1833, he claimed that that creature was 60 feet long and 3 feet wide.

In 1899, the HMS Narcissus was traveling near Cape Falcon, Algeria, when several of the sailors aboard sighted what they called a sea monster.

They estimated it to be roughly 135 feet in length and claimed that the creature possessed an immense number of fins, which they said propelled it through the water with enough speed to keep pace with the ship. They observed the creature for nearly 30 minutes before it sank below the surface and disappeared.

In 1883, several Vietnamese men found a decapitated carcass that had washed ashore at Hong Gai, Vietnam. The head was gone, but the body was formed of segmented joints that rang like sheet metal when struck. According to the account, the carcass smelled so bad that it had to be towed away into the sea.

In 1990, Con Rit allegedly attacked members of the Coast Guard. They were trying to rescue four men whose boat had ruptured and started to sink. When rescuers arrived at the scene of the tragedy, they saw a terrible picture.

Three people were literally tormented by two worms. When trying to recapture the bodies of the dead and one survivor, the animals showed aggression and poured boiling water over the hands and face of one of the rescuers.

Similar stories have been known in Vietnam since ancient times. European cryptozoologists studied this issue and even tried to catch the creature in order to better identify it.

For a worm, he has too much arsenal – teeth in the form of a beak, a hole for shooting boiling water, spikes on the fins. All this indicates that Con Rit is most likely at least a shellfish, and maybe a bizarre fish.

At the beginning of the 19th century, researchers were sure of the existence of Con Rit. And even ranked it among the cetacean creatures. Of course, this step of scientists, most likely, was erroneous.

Who this creature is is an open question. There is speculation that this may be a fossil organism that is not extinct. Similar ancient animals were found in the seas about 450 – 80 million years ago. If it is more or less clear with terrestrial creatures, then in the seas and oceans a variety of species could survive to this day in their original form.

Cryptozoologists have suggested a number of possibilities for what the con rit could be, if it is a real animal. Some say it is a primitive whale that is a relative of the zeuglodons which has evolved bony plates.

It could also be some sort of giant crustacean or other segmented sea creature, the type of giant “something” that many ordinary scientists expect could be discovered in the deep sea someday. It could also be a giant remipede, a creature similar to a centipede, but blind and ocean-dwelling.

Invertebrates are some of the most frequently discovered animals in modern times, and if a giant invertebrate were discovered, scientists would expect it to be an oceanic creature, since the depths of the oceans are the only place where many mainstream scientists believe giant animals may still lurk undiscovered.

Mystery of The OwlMan of Haverfordwest

The Mystery of the Sea Clergy