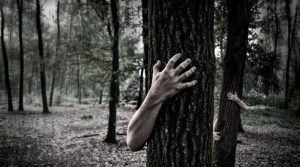 On the outskirts of the English village of Clapham the lands are mostly pastures with a spattering of forest here and there. Amongst these small patches of woods there is one no larger than fifteen acres.

You could walk from one end to the other along a small path that cuts through its centre in less than a half hour, but that hasn’t stopped this wood from becoming one of the most mysteriously paranormal locations in the UK. Welcome to Clapham Wood…

Beginning over fifty years ago in the 1960s reports of UFO sightings over and in the woods began to surface from the residents of the neighbouring farms. People who entered the forest began to come back with unexplained illnesses, but more worrying were the reports of grey mist on otherwise clear days, or those witnesses that would tell of being shoved by an invisible force.

Despite any of the strange reports the illnesses drew the attention of the authorities who would begin studying the land for radiation. What they found was not only shocking, but made no sense according to natural science.

First, studies using a Geiger counter revealed unusually high levels of radiation – enough that it would explain the illnesses. However, upon taking soil and core samples from the wood the surveyor discovered that the entirety of the land is situated on an underground bed of chalk.

Chalk is a naturally occurring, porous sedimentary rock comprised most of calcite, which as a fact does not conduct radiation. Put in the simplest of terms without scientific mumbo-jumbo: there is enough radiation in Clapham Woods to make a person ill and it is being brought into the woods from somewhere else.

The phenomenon at Clapham Woods took a turn for the worse in 1972 when Police Constable Peter Goldsmith, a former Royal Marine Commando was found dead in a small patch of bushes within the woods.

The cause of his death is to this day unexplained. However, as the corpse appeared to have been hidden, foul play was suspected.

Peter Goldsmith marked the beginning of a dark period for Clapham Woods. Three years later the corpse of pensioner Leon Foster would be found after missing for three weeks, then the Reverend Harry Neil Snelling the retired vicar of Clapham’s Parish. Except that Foster didn’t just die in the woods. He vanished without a trace for three years before his corpse was discovered in the woods – woods that are only fifteen acres large.

Until 1981 the mysteries of Clapham Woods were for the most part regarded separately and without a solid theory as to the cause. The general consensus focused on alien abductions or other extraterrestrial phenomenon, but then the body of Jillian Matthews was discovered. Like the others she had been missing for some time, in Jillian’s case six weeks before her body was discovered.

However, unlike any other victim of the woods, post-mortem investigations revealed that she had been brutally raped and strangled. It was this victim that led researchers Toyne Newton, Charles Walker, and Alan Brown to hypothesize that Clapham Woods was being used as a ritual grounds for a satanic cult. Their studies and findings are detailed in their book ‘The Demonic Connection’ published in 1987.

Between the years of 1972 and 1984 phenomenon in Clapham Woods had steadily increased, eventually including the killing of animals. Between those years it’s said that no less than one hundred animals ranging from dogs to horses have returned from the wood ill, severely wounded with odd markings, or simply found dead within the woods. The same year that ‘The Demonic Connection’ was published all of this would come to an abrupt end.

Officially known as The Great Storm of 1987, a freak wind storm swept across the English Channel killing over twenty people and causing £1 billion in damages to the English countryside with Clapham Woods in the centre of its path.

The storm hit with such sudden severity that the communities along the Southern coast of England were given no warning of its arrival, and to this day numerous questions are put forth to the phenomenon that caused it. Large tracts of land including much of Clapham Woods were torn from the ground, and with that all phenomenon has ceased.

Today Clapham Woods has regrown to a considerable amount of its original state but has lost an estimated three acres of its outer edges. It is a peaceful patch of nature and had you not read this article you would never have guessed its bizarre history.

Reader’s story: It Comes at Night