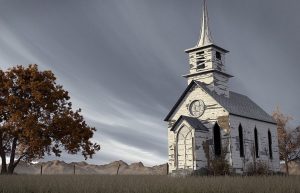 It was the day after Thanksgiving, 1998. I was 13 at the time, and at my best friend Cassidy’s house for a second Thanksgiving dinner. After we had ate, Cassidy called her friends, Jessica and Danni. They were sister, Jessica was our age and Danni was 12.

We had all seen the movie The Craft over the summer and interested in ghosts, witchcraft, and seances. Jessica and Danni were a lot more into it than Cass and I, but that was the last thing from our minds that night. Even though we were full, we decided to go to Dairy Queen to get ice cream. They all live in a development of houses that has a church on the main road into it.

There is also a Catholic school at the end of the field that faces the back entrance of the church. There is nothing scary about her neighborhood, people are always outside and the streetlights are on. Not your typical ghost site.

There isn’t anything eerie about the field either, it’s your typical field–grass. Across the street from the church is a little shopping center, where the Dairy Queen is. Everyone who lives around there walks through the churches field to get to the shopping center.

But being November, cold, and at night, there wasn’t anyone outside.

We weren’t really talking as we crossed the field. I do remember thinking, wow it’s really dark out tonight. We were walking almost in a line.

Cassidy was in the front, and closest to the sidewalk and the street.

Jessica and Danni were walking together, about 10 feet behind her, and I was behind them about 5 feet. I was directly in front of the back entrance of the church. I don’t know why, but I looked up at the church. A man was standing there. I couldn’t tell if he was in the foyer or the church.

I don’t know how long I was standing there looking at him before I finally remembered how to speak and said, “Umm, does anyone else see that?” It felt like I was looking at him for hours, but it was probably only a few seconds. Then Jessica spoke, “You mean that man?”.

She said it clear as day, like there was a perfectly good reason for a misty man to be standing there looking at us. I looked at her and Danni.

They were both looking at him. I looked back, expecting him to be gone, but he wasn’t. Finally Cassidy spoke, “Come on guys. I’m cold.” I don’t know if the man scared her or not, but I’m sure we saw him.” I didn’t know what to do so I just followed everyone else. Danni walked with me.

I was almost expecting the man to float after us and stop us or something, but we made it to Dairy Queen ghost free.

It was like a totally unreal experience. It was as if everything was happening in slow motion. I didn’t know what to do either. Once we had all gotten our ice creams and sat down, someone brought it up again.

Danni suggested that we go to CVS and buy a candle and hold a seance.

Not knowing what else to do, I agreed and gave her the money for it.

We bought a white one to represent peace. We walked the same way to Cassidy’s house, through the field but the man wasn’t standing there. We sat on her back porch and lit the candle. I still don’t know anything about seances, but Jessica and Danni figured that since I was the first to see him, I should ask questions and then we should all concentrate for an answer. So we did. We found out his name was Bob and he was 76. His wife was still alive.

We were freaked out by then, so we stopped. We never spoke of that night again, until this summer. Cassidy was spending the night and we were trying to freak out my boyfriend, Steve, by telling him ghost stories.

(He’s a big baby.) He didn’t say much about the story, just that people in his family went to the school by the church because the one closer to us now, wasn’t built yet. About a month later he brought it up to me.

He said he talked to his aunt or someone who had went to the school and they said that there was a janitor named Bob who used to work at the church, but he had died a long time ago. Maybe we didn’t see anything that night and our eyes were just playing tricks on us, maybe we all thought of the name Bob because it was Cassidy’s uncles’ name, and maybe there was just someone named Bob who worked there.

I guess we’ll never know. But it was a pretty interesting experience.

The Ghostly Lady in Black: Dark Secret of Georges Island

A Ghoulish Apparition: The Bizarre Legend of Arizona’s Red Ghost