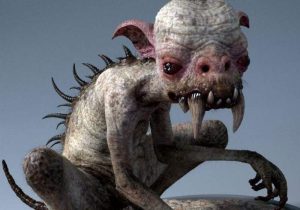 Cryptozoology is a field that looks into the possible existence of legendary and mythical animals, which are not yet accepted by science as official beings.

One of the most popular American cryptids, which has also been reported in Mexico and Puerto Rico with frequency, is the Chupacabra (or, el Chupacabra).

The name translates from Spanish for “goat sucker.” Along with Bigfoot, the eerie goatsucker may be one of the most reportedly seen cryptids in America.

The Chupacabra, or goatsucker, according to CryptoZoo, is supposed to resemble a small demon-like creature, according to reports. Many people who claimed to have spotted this cryptic animal say that it has the profile of a small kangaroo, but its skin is often described as scaly, like that of a reptile, and many have noted dragon-like spines or quills along its back.

The creature is said to stand at around three or four feet in height. According to some accounts, the Chupacabra moves in a kangaroo-like bounding motion; some say it can move as far as twenty feet in one leap. Some have claimed that the creature has large fangs, red eyes, and carries a smell of sulfur.

There have been many varying accounts of the cryptid, but the above characteristics seem to be prevalent in descriptions of the goatsucker. However, there is a second description, reported several times, that details the popular cryptic animal as resembling a dog.

What does the Mythical Creature, Chupacabra, do, According to Legend?

Most reports of the creature have come from Latin American communities in the United States, particularly in South Florida and Texas, and from Puerto Rico, Mexico, and a few South American nations. Although few have seen it in action, many deem the legendary Chupacabra as the culprit in the cases of dead farm animals.

Dead domestic animals, such as chickens, goats, sheep, and even cows, have been found dead in farms in the last couple of decades, their blood, completely removed.

Information about Chupacabra Sightings and Reports

Reports of the goatsucker started coming in in the mid 1990s. Most early accounts of exsanguinated animals attributed to the legendary and mythical Chupacabra came from Puerto Rico, but sightings of the cryptid itself, as well as further reports of bloodless livestock spread to Mexico, South America, and Latin American communities in the United States.

The Southwestern United States produced a large number of reports of victim livestock in the last decade. Some claimed to have found specimens of the dead Chupacabra, but most of these appear to be little more than mangy coyotes.

This demon-like mythical creature of legend has inspired awe in many communities over the last fifteen years. Although no one has been able to catch or find a specimen of the creature to be confirmed by biology, many still believe that the cryptic Chupacabra of legend is still at large.