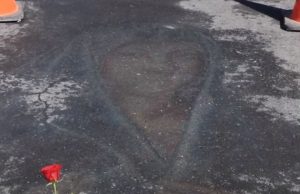 The chalk drawing of the Virgin Mary mysteriously reappeared 13 years after it naturally disappeared in 2007.

The drawing, which was created in an open parking lot in Monterrey, Mexico, during the 2007 festival celebrations, initially only lasted about three weeks before the chalk worn out to the point where the drawing was no longer visible, and ultimately all about he was forgotten.

Recently, however, locals began to notice that the image reappeared about 13 years after its initial creation, and no one was able to explain how this happened, especially considering that the drawing was exposed to the weather and the fact that through it cars were constantly passing by.

It is also interesting that the drawing appeared exactly in this place where it was drawn. Moreover, he was completely indistinguishable from that since 2007.

Crowds of people flock to the parking lot to see the miracle with their own eyes. Some attribute this phenomenon to divine intervention and leave candles and flowers.

“Do you believe in miracles or not, the question is, how did this image reappear 13 years after its creation?” Says Felix Palomo, Cultural Director of the Municipality of Guadalupe.

Until now, no rational explanation has been found for this phenomenon.