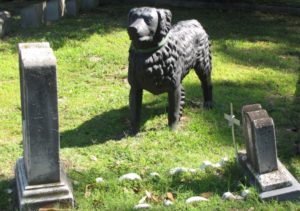 The cast iron dog in Hollywood Cemetery, Richmond, Virginia that guards little Florence Bree, is one of the most curious and beloved of all the grave markers in the cemetery.

When Florence Bree passed away at the tender age of just 2 years, 7 months from Scarlet fever on February 7th, 1862, the cast iron dog was placed at her graveside.

However, even after 150 years, the story as to how the cast iron dog came to be there is a cause of much debate. One such story has it that Florence’s elder brother begged his father for this dog, which used to stand outside a merchant’s shop in Richmond.

The father eventually bought the dog for him and when his little sister Florence died of scarlet fever the dog was placed at her grave to look over her.

It is also said the cast iron dog was placed there, not only to watch over Florence but also to save it from being melted down for confederate bullets during the Civil War.

Another story surrounding the statue is that the cast iron Dog’s owner remembered how much the girl liked to pat the statue when she went past his store, so he gave it to her family to guard her grave.

Another version goes on to say the family purchased the cast iron dog from the store owner but placed it in the graveyard even before little Florence passed away, to save the treasured family possession being melted down for confederate bullets.

Ever since the cast iron dog was placed there however, for over 150 years, stories still circulate that the dog moves around on her gravesite, that its eyes follow visitors, and that its bark is heard at night.

Visitors to Hollywood Cemetery often place gifts and decorate the grave with coins, jewelry, toys and the like by placing them at the dog’s feet and on little Florence’s grave.