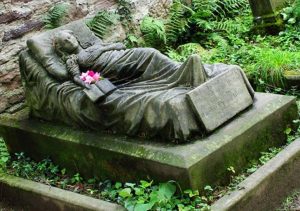 Located at the Alter Friedhof cemetery, Bonn, Germany, stands the amazing tombstone of Caroline Walter who died in 1867 due to tuberculosis.

The inscription at the foot of Caroline Walter’s grave says that this memorial was given by her sister Selma with love and that her separation from her loved ones was determined by God’s counsel.

Caroline Walter and her beloved older sister Selma moved to Freiburg to live with their grandmother after their parents died. She went to a school for young ladies and by the time she reached the age of 16, she already had a number of admirers who were attracted by her young beauty. When her sister married, Caroline happily went to live with her and her new husband.

In the early summer of 1867, at just 16 years of age, Caroline contracted tuberculosis and passed away a few short weeks later.

Her sister Selma wanted to create a lasting memorial and asked a sculptor to cast a grave in her sister’s likeness. The life size and life like sculpture depicts Caroline just as if she fell asleep reading in her own bed.

The grave was placed against one of the outer walls of the Alter Friedhof cemetery which had already been in existence for more than 200 years. It was a peaceful setting, made more peaceful by the beautiful grave of the sleeping girl.

It was soon after Caroline passed away, and the flowers on her grave from the funeral were wilting, that her sister began to notice that a fresh flower was always on the grave when she visited.

Months and then years passed and still no one had discovered who might be leaving the flowers. The cemetery groundskeepers could provide no clue but perhaps they were sworn to secrecy.

Caroline had never mentioned any young man in particular to Selma however legends abound. The most common one is that the flowers were placed by one of Caroline’s tutors who had fallen in love with her and mourned her passing for the rest of his life.

But, even had he lived to be a hundred, he still would have died more than half a century ago. Did he leave instructions for future generations to carry on the tradition?

Today, only a little sunlight filters through the boughs of the trees overhead, moss has grown over the place where she sleeps but every morning since that fateful day in 1867, a fresh flower lays on Caroline’s grave.