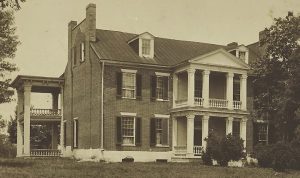 Carnton Mansion located in Franklin, is one of Tennessee’s most well known haunted sites. The mansion is located close to one of the bloodiest battles of the civil war.

Bloody History of the Haunted Mansion

Carnton Mansion located in Franklin, Tennessee is one of the state’s most well known haunted sites. The mansion was built in 1826 by Randal McGavock. The mansion went to his son John on his death in 1843.

In 1864, the Carnton Mansion and its residents watched as the Battle of Franklin ensued. This has been reported as one of the bloodiest battles of the Civil War. Over 9,000 soldiers were injured or killed with over 7,000 being Confederate soldiers.

John and his wife Carrie have been recognized for the support and assistance given to all the Confederate soldiers after the battle. Carnton Mansion became a field hospital for the wounded and dying.

Four confederate generals were reported to have died in Carnton Mansion at that time. Some of the generals, especially the ghost of General Pat Cleburme, have been seen many times wandering over the house and grounds of Carnton Mansion.

In 1866, John and Carrie McGavock made arrangements for approximately 1500 Confederate soldiers bodies to be moved and interred in a cemetery close to the mansion. The cemetery still stands today as a memorial to those brave soldiers who lost their lives in the Civil War.

Carnton Mansion is a museum and a tribute to Tennessee’s history, the Civil War, and the soldiers that lost their lives in the Battle of Franklin. It is open to the public.

The mansion has been restored to its former glory and even the blood stains of the four Generals who died there can still be seen on the floors today.

The haunting of Carnton Mansion and its surrounding property have been well documented. Many ghosts have been sighted both in and around the cemetery next to the mansion. Sightings have been reported inside the mansion and on the grounds around it.

Some of the most common sightings have been of General Pat Cleburme and various other confederate soldiers. There was also a female slave who was reportedly murdered there by a jilted suitor and many sightings of her have been reported as well.

There are also reported sightings of a lady in white who is either seen in the mansion itself or on the back porch of the mansion as well as a cook that has been frequently seen in the kitchen and wandering around in the back grounds of the property.

Reports of a floating head in the kitchen have been attributed to the cook as well as a ghostly presence who appears to be working in and around the kitchen.

Visitors also report that one soldier is seen frequently visiting one of the bedrooms. A young girl has been seen on the second floor by several workmen on the property as well. Sightings of many soldiers and hearing sounds of the battle that ensued have been reported as well.

So many reports of sightings have been documented over the years that it does appear that Carnton Mansion can indeed be considered a genuine haunted property in Tennessee.