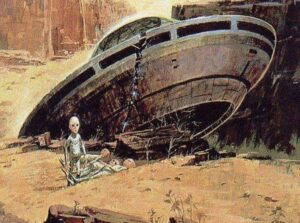 Around six years before the Roswell incident, a mysterious stories of a crashed UFO with alien bodies occurred in Missouri. In the Spring of 1941, Reverend William Huffman was summoned to pray over crash victims outside of Cape Girardeau, Missouri. When the military arrived everyone was sworn to secrecy.

He was shown three victims, however not human as expected, but small alien bodies with large eyes, hardly a mouth or ears, and hairless. Yet upon returning home to 1530 Main Street, rev. William choose to share this story with his wife and family.

The evidence for this case begins when Leo Stringfield, in his book UFO Crash/Retrievals: The Inner Sanctum, Status Report VI shares an astounding letter from Charlette Mann.

In the letter, the granddaughter of Reverend William Huffman, a traveling Baptist minister that had moved to Cape Girardeau and started ministering at the Red Star Baptist church in early 1941, according to church records.

Charlette’s letter recounted the deathbed confession of her grandmother who during the course of several days described the unusual event that Reverend Huffman attended late one early spring night just 10-15 miles by car outside of Cape Girardeau.

The quick summary of the event was that when Huffman arrived at the scene, there were police, fire, FBI and photographers already there and he was asked to provide blessings to the three dead occupants of the craft.

During this process he observed the command module with hieroglyphic writing inside and prayed over each of non-human entities. 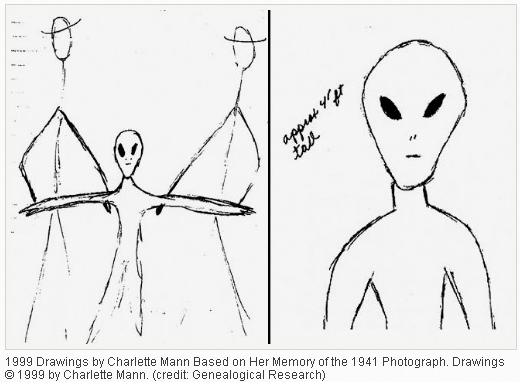 The following is part of the story in Charlette’s own words as recorded for Wood & Wood LLC’s upcoming television documentary:

“I saw the picture originally from my dad who had gotten it from my grandfather who was a Baptist minister in Cape Girardeau Missouri in the Spring of ‘41. I saw that [picture] and asked my grandmother at a later time she was at my home fatally ill with cancer so we had a frank discussion.

“She said that grandfather was called out in the spring of 1941 in the evening around 9:00-9:30, that someone had been called out to a plane crash outside of town and would he be willing to go to minister to people there which he did.

“Upon arrival it was a very different situation. It was not a conventional aircraft, as we know it. He described it as a saucer that was metallic in color, no seams, did not look like anything he had seen. It had been broken open in one portion, and so he could walk up and see that.

“In looking in he saw a small metal chair, gauges and dials and things he had never seen. However, what impressed him most was around the inside there were inscriptions and writings, which he said he did not recognize, but were similar to Egyptian hieroglyphics.

“There were 3 entities (non-human), lying on the ground. Two were just outside the saucer, and a third one was further out. His understanding was that perhaps that third one was not dead on impact.

“There had been mention of a ball of fire, yet there was fire around the crash site, but none of the entities had been burned and so father did pray over them, giving them last rites.

“There were many people there, fire people, photographers, and so they lifted up one, and two men on either side stood him up and they stretched his arms out, they had him up under the armpits and out here. As I recall from the picture I saw, he was about 4 feet tall, appeared to have no bone structure, soft looking.

“He had a suit on, or we assume it was a suit, it could have been his skin, and hat looked like crinkled, soft aluminum foil. I recall it had very long hands, very long fingers, and I think there were three but I cannot swear to that.”

After things calmed down a bit and Hoffman finished giving the creatures their last rites, two police officers picked one of the bodies up and held it between them for a photograph.

Before he left, Hoffman was told to keep what he had seen a secret. He was warned that what he saw was a matter of national security, and that it couldn’t be told to anybody.

Sources: bizarreandgrotesque.com, ufoevidence.org, The First Roswell Evidence For A Crash Retrieval In Cape Girardeau Missouri In 1941 by Ryan S. Wood;

Why Aliens Really Don’t Want To Come To Earth