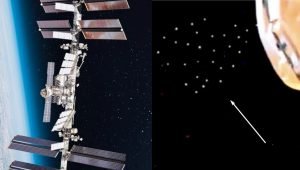 The objects were spotted by an eagle-eyed space watcher who believes the live feed actually captured the fleet of UFOs near ISS.

The ufologist arrived at his conclusion after carefully watching the footage that shows ‘orb-like’ objects moving past the camera.

All this, of course, is in the realm of speculation and theory as NASA has not released an official statement about the sighting.

However, the footage has been widely circulated and has lead to discussions and several other theories among UFO and space enthusiasts on social media.

People have come up with a variety of plausible and implausible explanations.

Some claimed they were spacecrafts belonging to the US Space force, which was created by former President Donald Trump.

Some believed they were UFOs, adding that NASA would claim its ‘space-junk’.