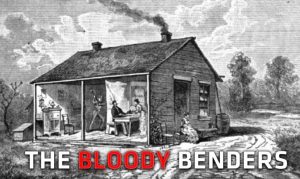 The township of Osage, Labette County, in Kansas was in the early 1870s the scene of at least a dozen murders by a family that became known as the Bloody Benders.

The family consisted of John Bender, 60, his wife Mrs. Bender (later referred to as Kate Sr. since no one knew her given name), 55, son John Jr. and daughter Kate. The Benders were widely believed to be German immigrants, only the male Benders, however, were born overseas and it is widely believed that they were not actually a family. No documentation or definitive proof of their relationships to one another or where they were born has ever been found.

John Sr spoke very little English, and when he did speak it, it was so guttural that it was usually unintelligible while his wife was apparently so unfriendly that her neighbours took to calling her the ‘She-Devil’.

While their parents tended to keep themselves to themselves, John Jr and Kate were known about the town of Osage and regularly attended Sunday church, and Kate also claimed to be psychic healer.

The family, believed to have been of German or Dutch origin, ran a bed and breakfast for travelers passing across the frontier. Whilst they lived in the back of their cabin, in the front of it they operated a small inn and store from 1871.

It was there that they took to murdering and robbing at least a dozen travelers who stayed at the lodging between 1871 and 1873. So many disappearances were reported over that period that it is unclear exactly how many victims there actually were.

It was noticed that the Benders’ garden was always freshly ploughed but never planted. It is believed that the method used to dispatch their victims was that when a guest would stay at the Benders’ bed and breakfast inn, the hosts would give the guest a seat of honour at the table which was positioned over a trap door that led into the cellar.

With the victim’s back turned to a strategically placed curtain, that whilst Kate would distract the guest, either John Bender or his son would come from behind the curtain and strike the guest on the right side of the skull with a hammer.

The victim’s throat was then cut by one of the women to ensure his death. The body was then dropped through the trap door. Once in the cellar, the body would be stripped and later buried somewhere on the property, often in the orchard.

Although some of their victims had been quite wealthy, others had been carrying very little of value on them and it was surmised that the Benders had killed them simply for the sheer thrill. Suspicions were aroused and rumours spread within the village after a number of locals went missing but no official inquiries were made.

It was not until Dr William York had vanished after setting out in search of neighbour George Loncher and his daughter, who themselves had vanished after leaving Independence for a better life. Dr York’s brother, Kansas State Senator Alexander M. York, launched a hunt for his missing brother but to no avail.

On April 3, Colonel York returned to the inn with armed men after a woman fled the lodging claiming Ma Bender had threatened her with knives. Ma allegedly could not understand English while the younger Benders denied the claim.

When York repeated the allegation, Ma flew into a rage and branded the woman a witch who had cursed her coffee and ordered the men to leave her house. It was this outburst that revealed for the first time that ‘her sense of the English language’ was much better than had been thought.

Before York left, Kate bid him to pay a second visit the next Friday night when she promised to use her clairvoyant skills and contact the spirit world to help him find his missing brother.

The men with York were convinced the Benders were guilty and wanted to hang them all but York insisted that evidence must be found. However, as suspicions strengthened and the finger of blame pointed stoutly towards the family.

As more people vanished, a town meeting decided the perpetrators of the crimes had to be found and a search of every home in the area was authorized. Pa Bender and his son both attended the meeting.

Then, within two weeks of the meeting a passer-by noticed the Benders’ livestock had not been fed and it became clear the family had slipped into the night, never to be seen again.

When the house was finally searched, their possessions were gone. What remained was a grim collection of more than a dozen bodies and various body parts buried in the property’s grounds. One was even discovered in the well.

The first to be found was that of Dr York. He was buried face down with his feet barely below the surface among trees in the orchard.

As more corpses were unearthed, the true tally of their murderous spree gradually became clear. All victims but one had been hit over the head and their throats cut. Just the body of a young girl was found with no injuries sufficient to cause death.

It was speculated that she had been strangled or buried alive alongside her mother. A state-wide manhunt was launched but the family was never found. Their true identities have been the source of speculation ever since. In the weeks following the discovery, 12 men ‘of bad repute in general’ were arrested, accused of disposing of the victims’ stolen goods.

In Thayer, 12 miles north of the Bender inn, detectives following wagon tracks discovered the Benders’ wagon, abandoned with a starving team of horses with one of the mares lame. Inquiries revealed that the family had boarded a train for Humboldt, Kansas.

The Humboldt station manager informed detectives that once there that the family split up, with John Jr. and Kate taking a train south, whilst Ma and Pa Bender, carrying a doghide trunk (possibly loaded with money), had taken a second train to St. Louis.

A team of lawmen managed to pick up the family’s trail as far as Texas and tailed them to El Paso and into the Chihuahua Desert. They were not pursued however, as lawmen following outlaws into this region often never returned. One detective did claim later that he had traced the pair to the border, where he had found that John Jr. had died of apoplexy.

Several groups of vigilantes were formed to search for the Benders.

Yet another claimed to have killed the Benders during a gunfight and buried their bodies on the prairie. However, no one ever claimed the $3,000 reward.

On October 31, 1889, two women, Mrs. Almira Monroe (aka Mrs. Almira Griffith) and Mrs. Sarah Eliza Davis were arrested for larceny in Niles, Michigan. They were released after being found not guilty but were then immediately re-arrested for the Bender murders, after witnesses identified them as Ma and Kate Bender. They were brought back to Kansas, but after being held for two months they were released on grounds of insufficient evidence against them.

The story of their escape spread, and the search continued on and off for the next fifty years, and although there were various alleged sightings none led to any arrests. There have been suggestions that they joined a group of outlaws in New mexico, others that they fled to the East Coast, even to Europe.

The Strange Life Of Schlitzie – The Sideshow “Pinhead”