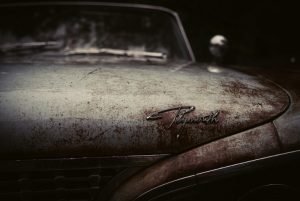 Larry Conrad and his business partner Charlie had just finished eating lunch at a small diner in Abbeville, Louisiana. The two men didn’t know it at the time but they were about to have an experience that would haunt and mystify them for the rest of their lives.

Traffic was very light with just one car ahead of the men and one behind. The car in front of Larry and Charlie was a long distance away when they first noticed it, but it appeared to be going at a very low rate of speed as the men rapidly approached the vehicle.

As they got closer they could see that the car was very old, they estimated it to have been late 1930s vintage. The old car was in perfect condition as if it had just been driven off the dealer lot, it even had an orange Louisiana license plate with the year 1940.

After admiring the old car for a couple of minutes Larry and Charlie decided to pass the slow-moving car. As they pulled up beside they could see that a woman was driving and there was a young child on the seat.

The woman was dressed in very old clothing, a style that would have been normal at the time the car was new but was very out-of-place in 1969. What bothered the two men though was the very frightened look on the woman’s face.

Thinking that she may need help, they motioned and mouthed words to the woman as the windows on the old car were rolled up.

Eventually, the old car pulled to the side of the road and stopped. Larry and Charlie pulled their car over and stopped in front of the woman’s car. The two men were shocked when they got out of the car and looked back, the old car along with the woman driver and young child had vanished.

The baffled men looked at each other not saying a word when the car that had been driving behind them arrived and stopped. The driver of that car was very animated and demanded to know what happened to the old car. Of course Larry and Charlie had no idea of what happened other than the car vanished.

The man told them he had seen the old car pull to the side of the road and saw Larry and Charlie park in front of the car. He said the old car blocked part of his view of the two men’s car momentarily, then it was simply gone.

The three Men talked about calling police but decided that would be pointless. The area surrounding the highway was flat open land, the woman could not have driven off the road.

There was no reason to search for her because there was no place for her to go. After some time the men, with no understanding of how, had to admit to themselves that the old car had disappeared right in front of them.