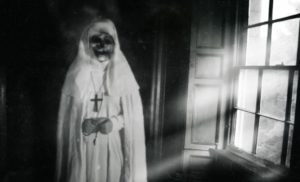 On New Year’s Day 2017 at around 8.15am, a 24-year-old woman named Jessica left her home on Seth Powell Way, Huyton bound for her auntie’s home in Stockbridge Village.

Jessica had been minding her aunt’s dog, George, all night (because her aunt had gone to a party), but the dog had kept Jessica awake for most of the night, scratching at the door because it was pining to go home.

Jessica therefore set out at 8.05 am with the dog on a chain leash, bound for her auntie’s home.

George seemed to stop at every lamp post, and so, it was around 8.15am as Jessica took a shortcut across the circular grassy island of the roundabout at Waterpark Drive and Haswell Drive.

Jessica was that occupied shouting at the misbehaving dog as it dragged its paws to sniff every inch of the ground, she didn’t notice the eerie figure at first, but then she glanced up and there it was – a nun kneeling at a large stone on the island of the roundabout.

When the dog George saw this motionless nun, it began to bark at it, and its hackles rose up. George was so afraid of the nun, he pulled Jessica to the left with the leash and she almost fell over.

The kneeling figure did not react in any way, and Jessica ran across the island of the roundabout with George pulling her along.

Jessica then got another shock, because she felt as if the nun was behind her, and so she turned and looked over her right shoulder – and there it was, moving along after her as if she was on wheels – and it had nothing inside of its veil and cap – just blackness.

Jessica let out a scream and looked about. Not a soul was about and not a single car passed. She kept on running, and the dog howled as it raced ahead of her.

The home of Jessica’s aunt was still 800 yards away, and the young lady looked back again – and she was utterly relieved to see that the figure had vanished.

That ghostly nun has been seen in the area before. In 2009 I received a letter from a man named Jimmy who saw the nun darting about one evening as he stood on the balcony of his flat in the hi-rise Mosscraig tower block in Stockbridge Village.

The time was around 10.30 pm in late summer, and dusk was gathering. Jimmy was scanning the horizon with a pair of low-powered 8 x 30 binoculars as his girlfriend Gina made him a sandwich.

A keen ornithologist, Jimmy had been looking at a sparrowhawk through the binoculars but now as twilight gathered, he’d lost sight of the bird, and had noticed something very strange under a quarter of a mile away.

It looked like a black point to the naked eye, moving about rapidly on the island of the roundabout to the left of Haswell Drive, so he picked up the binoculars and focused on the spot – and saw it was a figure in a long robe and hood, and it was moving at an incredible speed into the path of oncoming cars, and then back to the middle of the roundabout’s island.

Jimmy called Gina onto the balcony, and she had a look through the field glasses and decided the figure was a nun.

“Nah, it looks like a monk,” Jimmy told her, but Gina had much superior eyesight and she said she had seen the white wimple part of the nun’s habit clearly – but she was a bit spooked at the way the nun was flitting about at high speed.

The figure went missing at around 10.40 pm, and Gina, feeling there was something obviously supernatural about the unbelievably agile nun, asked her boyfriend to come in off the balcony, but Jimmy was fascinated by the possible ghost, and he kept scanning the area around the roundabout for the sinister figure.

Just before 11pm, Jimmy backed away from the balcony and almost stumbled onto Gina as she sat watching the TV.

“She’s down there,” he whispered, with a look of horror on his face.

“What?” Gina got up and expected him to say he was joking, but Jimmy swore and said, “She’s down there!”

Gina went out onto the balcony and Jimmy tried to stop her by grabbing her arm but she pulled her arm away from his grasp and looked over the balcony rail.

Jimmy was right; he had not been trying to pull her leg. A nun was standing still on the corner of Little Moss Hey, next to a wheelie bin – and she was looking up at Gina – but it had not been a face that was turned upwards to the balcony, just a black oval.

A feeling akin to an electric shock jolted through Gina’s chest, and she found herself doing what Jimmy had done a minute ago – she backed away and stumbled into the living room, where her boyfriend was muting the telly.

“I told you!” Jimmy said through clenched teeth. Gina had never seen him so scared, and she herself saw her bosom moving because of palpitations.

“Close the door, Jimmy,” Gina told her boyfriend and then closed the door herself anyway. Jimmy dimmed the lights, and then he went into the kitchen and took a look out the window of another room – and the nun was still there below.

Gina felt goosebumps rise on her arms. She whispered: “She knows we’re looking at her. This is so creepy!”

“It’s not a ghost, Gina,” said Jimmy, in a poor attempt to calm down his girlfriend, “it’s someone dressed up as –” And before he could finish, the figure flew across the road – towards the 15-storey tower block. Gina let out a scream.

Jimmy went to the front door, put on the bolt and the safety catch of the Yale lock, and then he backed away into the living room, where Gina had her hands to her face as she looked in terror at that front door.

Jimmy said over and over that the nun was just someone messing about, but Gina told him to be quiet. Then, they both thought they heard a noise outside the front door. It sounded like a click.

Jimmy wanted to look through the wide-angle door viewer but Gina clutched his hand and refused to let him go.

The frightened couple stood there listening, but heard nothing more – but they did smell something that reminded them both of church incense, and it seemed to come down the hallway from the front door.

Jimmy went back out onto the balcony – and as soon as he looked over the rail, he saw the nun, “bombing down the road” until she stopped at the bottom of a neighbouring towerblock called Whincraig.

Gina saw her too, and she had a look at the unearthly figure through the binoculars and saw that the figure didn’t seem to have any hands in the sleeves of the habit.

Jimmy was supposed to drive his girlfriend to her home on Longview Drive at around midnight, but Gina decided to stay at his flat because she was so scared of encountering the creepy nun.

The couple watched the nun remain stationary for a while, until someone came out of Whincraig to go to their car, and then the figure moved off at a phenomenal speed down Little Moss Hey, and flew around the curve in the road below the block of flats where Jimmy lived. It then vanished into the night.

At around 1am, Jimmy opened the front door a few inches and peeped outside. On the little bristly mat outside his door was something which looked like a six large black grapes on a stalk, but Gina thought they looked more like huge berries.

The couple never touched them, and established that the berries were giving off that strong smell of church incense.

The door was closed, and on the following morning, Jimmy and Gina saw that the fruit was gone.

The significance of the berries is unknown; did the nun leave them there? Thankfully, Jimmy and Gina have seen no more of that freakish, spooky nun.

The Creepy Story Behind The Pigman Road