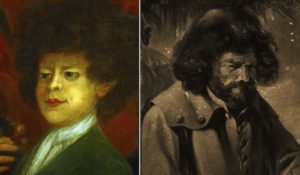 Peter the Wild Boy (1725-February 1785) was a feral child of unknown parentage found in 1725 living wild in the German forest near Hamelin.

He had been living an entirely feral existence (alone and naked), surviving by eating forest flora; he walked on all fours, exhibited uncivilized behaviour, and could not speak a language.

Once found, he was brought to London – aged about 12 – by George I whose interest in the unfortunate youth had been aroused during a visit to his Hanover homeland, where he became a “human pet” at Kensington Palace. 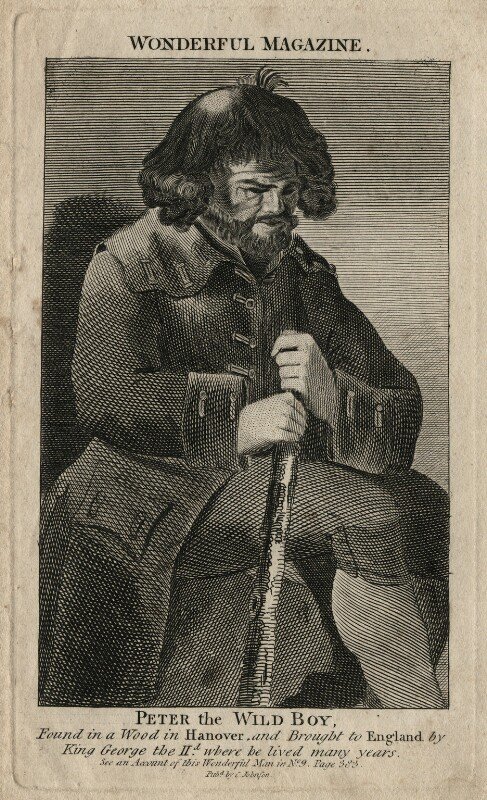 Tales of feral children always fascinate, they may have experienced severe child abuse or trauma before being abandoned or running away. They lack the basic social skills which are normally learned in the process of enculturation.

For example, they may be unable to learn to use a toilet, have trouble learning to walk upright and display a complete lack of interest in the human activity around them. They often seem mentally impaired and have almost insurmountable trouble learning a human language.

Myths, legends, and fictional stories have depicted feral children reared by wild animals such as wolves and bears. Famous examples include Ibn Tufail’s Hayy, Ibn al-Nafis’ Kamil, Rudyard Kipling’s Mowgli, Edgar Rice Burroughs’s Tarzan, J. M. Barrie’s Peter Pan, and the legends of Atalanta, Enkidu and Romulus and Remus, but Peter case caused a sensation. It was the Age of Enlightenment, and he became a symbol in the debate about what it meant to be human.

When Peter first came to England he was a media sensation in Georgian London, the subject of newspaper articles, poems and ballads – often satirising the extravagance and tortuous etiquette of the court.

One mockingly described him as “The Most Wonderful Wonder that ever appeared to the Wonder of the British Nation”. Peter probably the luckiest of all feral children found in the wild. as soon as he was found he was imediately taken in and cared for by royalty.

The Princess of Wales, Caroline of Ansbach, took an interest in Peter’s welfare, and in 1726, after the initial public curiosity began to subside, she arranged for Dr Arbuthnot to oversee his education. They tried to educate, civilize, and teach him to talk. 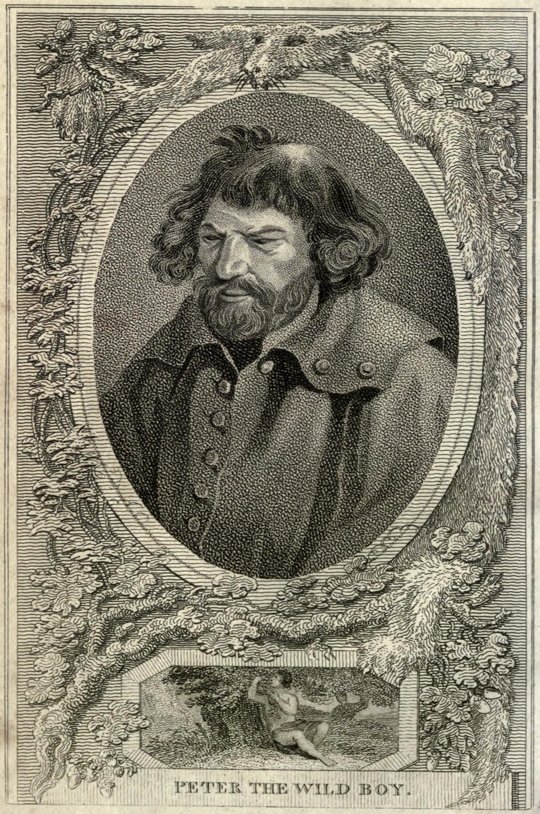 However all efforts to teach him to speak, read or write failed. The king invited him to dine, but was horrified by his lack of table manners. Each day courtiers would wrestle him into a green velvet suit and each evening would try to persuade him into bed but he preferred to curl up on the floor in a corner of his room.

After Peter was discharged from the supervision of Dr Arbuthnot, he was entrusted to the care of Mrs. Titchbourn, one of the Queen’s bedchamber women, and then Peter was left to the care of Mr. Fenn, who was allowed £35 a year for his support and maintenance.

After the death of James Fenn he was transferred to the care of his brother, Thomas Fenn, at another farmhouse, called Broadway Farm. He was identified as Peter the Wild Boy, possibly through a description of him in the London Evening Post after he went missing from Broadway Farm and could not be traced.

He was returned to Thomas Fenn’s farm after a fire incident that broke out on 22 October 1751 in the parish of St Andrew’s in Norwich and they had a special collar made for him with his name and instructions for what to do if he is found, in case Peter got lost again.

The interior designer and painter William Kent included a depiction of Peter in a large painting of King George I’s court which can be seen today on the east wall of the King’s Staircase at Kensington Palace in London. Peter is shown wearing a green coat and holding oak leaves and acorns in his right hand.

On 2011 Lucy Worsley, curator of Historic Royal Palaces speculate that Peter had been raised by wolves – or perhaps bears – and this was why he ate with his hands, disliked wearing clothes and could not be taught to speak.

She initially assumed autism, but later found more clues from the portrait of Peter, by William Kent that hangs in Kensington Palace. New analysis of the portrait suggests Peter had a rare genetic condition known as Pitt-Hopkins Syndrome says Professor Phillip Beales, of the Institute of Child Health.

Pitt-Hopkins Syndrome is a genetic condition only identified in 1978, which has severe neurological effects characterized by mental retardation, wide mouth and distinctive facial features, and intermittent hyperventilation followed by apnea.

Peter died on 22 February 1785 and was buried in Northchurch. His grave can still be seen in the churchyard of St Mary’s Church, Northchurch, directly outside the main door to the church.

Until now the question remained, why George I give so much attention to Peter, even though he couldn’t talk, nor did he walk, preferring to scamper on all fours. “Many people like him in Georgian England would have been freaks in a circus, but he ended up in good hands,” says Worsley.