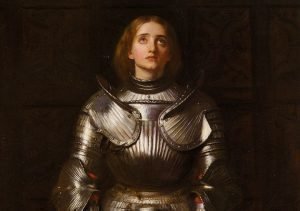 Joan of Arc, a Frenchwoman who lived in the early fifteenth century, remains one of the most fascinating figures of history. Joan of Arc is not only a national heroine of France, but she has also been canonized as a saint by the Roman Catholic Church.

Joan of Arc’s story is captivating because she, as a woman, led French armies during the Hundred Years War, restoring France’s heir to the throne, but also because she claimed to have visions and hear supernatural voices speaking to her and giving her instructions.

In era when the Catholic Church staunchly held that it was the sole choice of spiritual authority, Joan asserted that God spoke to her directly. In the end, she was captured by the English after several crucial victories, put on trial, and burned at the stake.

Joan, also nicknamed the Maid of Orleans, was born in 1412 in the village of Domremy, France in the northeastern part of the country. Her exact birthday is not known, although it is commonly dated to be sometime in January.

Her birthday has come to be celebrated every year on January 6, the day of Epiphany on the Christian calendar. Her real name was Jehanne d’Arc, and her father, Jacques d’Arc was a peasant farmer. Both her father and mother, Isabelle, were devout Catholics.

Joan herself had characteristics that set her apart from others. She was extremely pious, claimed to have direct communication with the divine, and relied on individual experience of God’s presence instead of through the Church. Joan also had extraordinary courage, both physically and mentally.

Joan began hearing voices and having visions at around the age of twelve or thirteen. She interpreted the visions as being sent from God. These voices told her to do certain things, and during her trial, she said that the angels and saints in her visions told her to attend church and live devoutly at first. 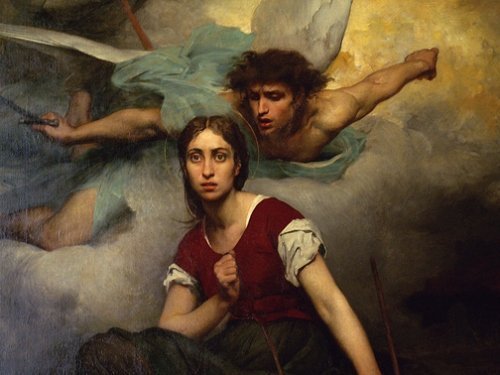 She also claimed that a bright light accompanied these visions and that the voices were more distinct when bells rang. She steadfastly believed that the voices she heard came from St. Michael, St. Catherine, St. Margaret, and the archangel Gabriel among others.

After a while, the voices told her to deliver France from the English who had invaded and to establish Charles VII as the king of France.

France was in chaos at this time during the Hundred Years War. It had been fighting a series of conflicts with England for control of France’s throne. The French Dauphin, Charles, fought against the English king Henry V with disputes about who was the rightful heir to the throne.

The English had invaded France, and their armies occupied much of the northern part of the country including Paris. They also made an alliance with the Duke of Burgundy, the chief rival of Charles.

The Burgundians turned against Charles, who had not yet been crowned king five years after the death of his father. The English won several victories against the Dauphin’s demoralized forces including at Agincourt.

By about the age of sixteen, in 1428, Joan firmly believed that the voices wanted to her fight for France, lift the English siege of Orleans, and restore Charles to the throne. Joan made arrangements to travel to Vaucouleurs to ask permission from the Dauphin to join his cause, but many people dismissed her visions.

It was not until the following the year, in 1429, that Joan finally met Charles. However, when Joan approached, Charles disguised himself and hid in a group of attendants to test her. Joan was not fooled and immediately saluted him.

Before giving her permission to lead soldiers, Charles also sent Joan to Poitiers to be examined by a group of bishops and doctors. Joan apparently made a good impression on them with her devoted faith, simplicity, and honesty. The theologians did not find anything heretical in her assertions of supernatural counsel.

In the spring of 1429, Charles gave Joan several soldiers to fight alongside her, and her brothers Jean and Pierre also joined her side at the besieged city of Orleans. The Dauphin also offered Joan a sword, but she refused and instead claimed she would use a sword found in the church of Ste-Catherine-de-Fierbois.

Joan knew that exact spot the sword would be in, and sure enough, a sword was found there. Although Joan never actually fought in a battle or killed an enemy, she accompanied her men into battle as sort of an inspirational mascot.

She carried a banner, or standard, which bore the name of Jesus, and was painted with an image of Christ in judgment with angels presenting a fleur-de-lis.

Joan wanted to change the approach the French had taken to the war because they had adopted a nonaggressive, cautious strategy that had not been effective against the English. On May 4, 1429, Joan and her men attacked English fortresses surrounding Orleans, starting with Saint Loup and captured it. 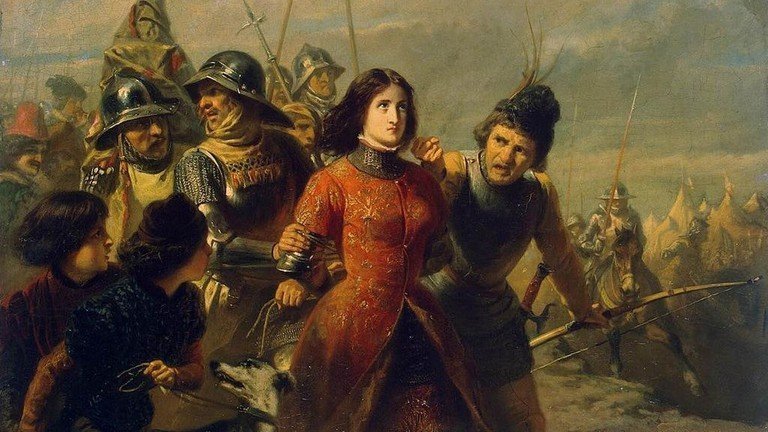 The next day, Joan and her men again marched to another fortress called Saint Jean le Blanc and captured it. Joan wanted to keep up the offensive but the war council turned her down.

Undeterred, Joan and her men unbolted the gate meant to keep her from launching an attack and fought the English at their stronghold of Les Tourelles on May 7. Joan was wounded in the battle when an arrow hit her shoulder but she continued to fight nevertheless. The French troops admired her courage and it inspired them to keep fighting until the English surrendered.

Joan wanted to move as fast as possible to get Charles to Reims, the traditional place of royal coronations. Her victory at Orleans rallied the French army into aggressive action, and they won a series of victories all the way to Reims. On July, 17 of 1429, Charles was finally crowned as the French monarchy with Joan in attendance.

She knelt before Charles and called him king for first time. Charles was now Charles VII. Joan had accomplished her mission but felt a sense of urgency in expelling the English from France. With Joan’s assistance, the war had finally turned in France’s favor.

Joan’s next move was to besiege Paris under the permission of King Charles, which had then become a stronghold for the English. The French assault on the city began on September 8, 1429 but was not successful.

Joan also received another wound when a bolt from a crossbow hit her in the thigh. Joan continued to fight but Charles ordered the French forces to withdraw. Joan participated in a brief campaign during November and December of that year and spent the winter at various estates. Some historians believe that Joan’s voices had told her that she would not last another year.

When the spring rolled around again in 1430, Joan once again returned to battle. However, this time Charles VII and his government did not directly support her forces. They wanted a peaceful solution instead.

In May, the Duke of Burgundy who allied himself with the English, laid siege to the city of Compeigne. Joan joined French forces in the city in order to come to its aid in lifting the siege. Joan, however, had a sense that she would be captured by the end of June.

True to her prediction, Joan was captured by the Burgundians at the end of May. Joan had led a small party outside the city to attack a Burgundian camp. Enemy troops were lying in wait and surrounded Joan and the other soldiers who had no means of escape because drawbridges had been shut. Joan was pulled off her horse and surrendered.

Joan then spent several months as a prisoner before being transferred to the English for a price of 10,000 livres. Much criticism has been thrown at Charles VII for not doing enough to try and spare Joan’s life.

She was moved to Rouen and put on trial there. The trial was made up by a series of hearings that took place from February 21, 1431 to the end of March, and a man named Pierre Cauchon was put in charge of it.

Cauchon had been an English supporter. Some of the judges in the trial later admitted that the English conducted the trial out of revenge and not because they believed her to be a heretic.

In any case, the Inquisitorial judges brought up several charges against her including dressing like a man and heresy for claiming that God spoke to her directly. Many believe Joan dressed in men’s clothes so that she would not susceptible to being raped, but she also cut her hair short because the voices told her to do so.

The judges questioned Joan about her visions and made an attempt to link her to witchcraft. They claimed that her banner had been endowed with magical powers, and they scorned her saints as demonic.

In reality, the English wanted to get rid of Joan at all costs because she had won several significant victories against them. The English believed that could get Joan convicted of heresy in order for her to be sentenced to death. Because of that, Joan was constantly questioned about her visions. Many of the judges believed that these voices were false.

The ecclesiastical court gave Joan the chance to recant, and at first, Joan refused. However, upon being offered life imprisonment if she admitted to being guilty, Joan signed a document that confessed her sins. On the other hand, it appears the Joan changed her mind because she dressed in men’s clothing again and claimed the voices had returned to her.

After hearing this, the judges condemned her as a relapsed heretic and sentenced her to die. Joan was burned at the stake on May 30, 1431. During her execution, it is believed that Joan remained calm and asked for a cross to look at.

She gave her confession and took part in Communion before her death. France’s war with the English raged for another twenty-two years before finally ending. At that time, the Pope authorized a retrial and found Joan innocent.

Then, in the late 1800s, efforts were made for Joan’s beautification that occurred in the early twentieth century. On May 16, 1920, Pope Benedict authorized her canonization, and Saint Joan of Arc has since become of the most popular Roman Catholic saints.

Joan of Arc’s legacy continues to the present day. She has become a national symbol of France, and the French people see Joan as a person from humble origins for fight for nationalism. The second Sunday in May is a French holiday in her honor.

The French Navy has also named three vessels after her. Joan of Arc has been the subject of several Hollywood films over the years with famous actress portraying her onscreen. Joan is also admired by millions of Catholics who find her story inspirational. Joan is the Roman Catholic saint of soldiers and of France.

Joan’s visions have also been an ongoing source of fascination. Historians claim that Joan was not mentally unstable, and some scholars have tried to demonstrate that Joan had migraines, epilepsy, tuberculosis, or schizophrenia.

However, no evidence exists for the theory that Joan had a mental illness. At her trial, Joan spoke clearly and convinced the judges that she had an accurate memory. Joan of Arc’s claims that she heard God speaking to her directly are not that different from divine inspiration many profess today.

Joan of Arc remains an intriguing historical figure, not only because of her visions and hearing voices. As a woman, Joan of Arc led the French to several victories over the English during the Hundred Years War.

She made a name for herself by inspiring the troops and because of her devout faith. Joan of Arc’s trial and execution only made her into a martyr, and she subsequently became a Roman Catholic saint in the early twentieth century. Her life and her visions still inspire a sense of amazement.