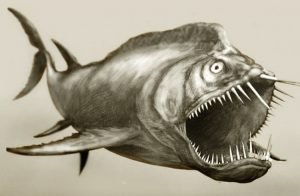 In 1937, there were numerous sightings of a large creature in the White River. Four people signed affidavits that they had seen this huge monster. By summer’s end, thousands of curiosity seekers had invaded the town of Newport in hopes of seeing this strange critter.

During the first week of July, tenant farmers on Bramlett Bateman’s plantation told him they saw a monster in the river. Fishing was poor and they believed this creature was the reason why. Although Bateman was skeptical, he went to the river to see this strange beast for himself. He was not disappointed.

After he saw the monster, he contacted D. N. Graves of the Arkansas Game and Fish Commission. He wanted to dynamite the eddy in the river and kill it. Bateman and his tenants believed the monster was dangerous.

He was denied permission because it was illegal to dynamite inland waters. Some fishermen would dynamite the waters to stun fish and take them all out of the waters. Dynamite sticks were called DuPont Spinners.

Whitey had settled into a routine. He surfaced in the late afternoon and stayed up for 5 to 15 minutes before diving back into the water.

Bateman said was about 12 feet long and 4 to 5 feet wide. Graves thought it might be a deep sea creature that swam up the river and became trapped in the deep eddy.

News about the strange creature attracted visitors to the area. Some brought cameras, others, dynamite sticks. One brought a machine gun! Deputy Sheriff Z. B. Reid glimpsed the monster and said it looked like a giant catfish. Dr. Dellinger, zoology professor at the University of Arkansas thought that it might be a gigantic sturgeon. One had recently been caught in the Tallahala River in Laurel, Mississippi.

W. E. Penix announced that he would make a rope net, 40 by 15 feet, with 8 inch mesh to snag the monster. He said it would take 10 days to construct the net and would accept donations to help with this project. A West Memphis radio station was making arrangements to broadcast the attempted capture live.

Penix said that he stopped making the net because he had run out of materials and money. The radio stations found that the broadcast would be too expensive, so it cancelled the airing. 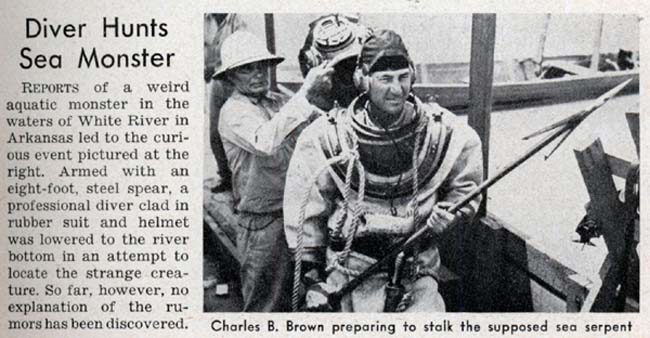 Marion Dickens, Newport Chamber of Commerce president, hired an experienced ex-Navy diver, Charles Brown to go into the river and see what he could find. The town posted signs by major roads and invited members of the press to attend.

Stores were closed. A communications system was set up so the event could be broadcasted. Visibility in the eddy was less than a foot. The dives lasted for several days and Whitey was not cooperative.

The next spate of reported sightings was in 1971.

The locals had noticed that the monster appeared to have about a forty year cycle of making its appearances. There were theories about this. One of the more creative ones was that the creature lived in the Sargasso Sea and swam to the river to lay an egg.

The same person told a story about how a monster sank a shipment of gold during the Civil War and theorized that alleged sightings of Japanese submarines in the river during World War II may have been the monster.

Cloyce Warren and two friends were in a boat, fishing, when a water spout appeared about 20 feet from their boat. It was the monster. They said its back was 20 or more feet. Warren took a Polaroid picture of it and sold it to the Newport Daily Independent. 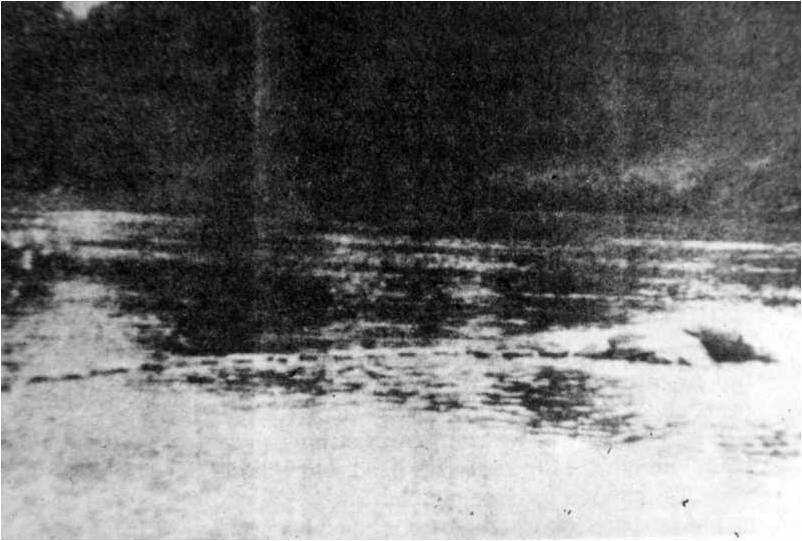 14 inch long and 8 inches wide tracks of a 3 toed creature were found on Towhead Island by a witness who wanted to remain anonymous. Bent trees and crushed vegetation evidenced that something very large had walked there.

A CBS news crew arrived in town and went to the island. The police had made casts of the tracks. The witness said he had seen the tracks, sporadically, for the past several years, but had not thought much of them until he heard about the monster sightings.

Bateman, who had seen the monster in 1937, was contacted by the television crew. He declined the interview.

The last sighting was probably the most terrifying. Ollie Richardson and Joey Dupree were in their boat near Towhead Island. The boat bumped into something, then rose out of the water on the back of a huge creature.

February, 1973: Senator Robert Harvey introduced a bill that the part of White River running from Jacksonport to Possum Grape be designated the White River Monster Refuge. The bill passed by vote. It is illegal to harm or kill Whitey.

In 1948, people near Clearwater, Florida were astonished that there was something strange visiting their beach. Whatever it was was gigantic and left large three toed tracks as a calling card. The biggest toe was 13 ½ inches long. It was possible to estimate the creature’s weight from the indentations in the sand. Whatever it was weighed about three tons.

Ivan T. Sanderson, an eminent cryptozoologist was doing a TV series for NBC. He and a crew flew to Florida so they could make plaster casts, take measurements and interview those who saw it.

Fishermen and other locals saw something 15 or 20 feet tall waddling about the beaches and marshes on two legs. Four pilots, independently, told Sanderson that they saw something black and gigantic splashing around the banks of the Suwannee River.

One man appeared to be sheepish when he spoke to the cryptozoologist. He admitted that he might be crazy, but the creature resembled a giant penguin. The critter was seen off and on from February to October, then it disappeared.

Sanderson was wary of the possibility that what he was investigating was a hoax. He asked some engineer friends to design a machine that could make such deep footprints. Their conclusion that such a machine would be too expensive to build.

It would be extremely difficult to control because only the only point of contact with the ground was the two feet. It would have to be large enough to weigh three tons and small enough to go through the threes and thickets.

They reached the decision that it was easier to accept the possibility that a giant penguin existed than the existence of such a machine to explain the sightings.

Three toes tracks like those found in Florida have been found in other places. These tracks were found in Pennsylvania along the banks of the Monongahela River in 1966.

Biologist Roy P. Mackal believes Whitey is a case of a known animal living outside of its natural habitat or that people, not knowing what the animal is, could not identify it. He believes Whitey is an elephant seal that swam up the Mississippi River to the White.

The problem is that the natural habitat of the seal is in California, from San Francisco to Baja California. The animal would have had to swim to the Panama Canal to reach the Atlantic, then the Mississippi. They do not leave three toed tracks.

Could the Whitey be the same animal that was seen in Clearwater? Three toed tracks, huge and the evidence of the flora of the land. Giant penguin? This seems to make more sense than a seal swimming through the Panama Canal.