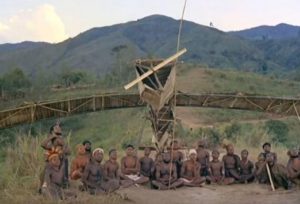 A cargo cult is a type of religious movement that sometimes emerges when a primitive or isolated society begins to encounter a more modern or technologically advanced external society.

Although the concept of cargo cults has existed in one form or another for centuries, this peculiar religious activity was officially recognized by anthropologists after the Second World War.

During World War II, the Allies established several temporary military installations on islands in the South Pacific, which introduced the indigenous populations to various manufactured goods and supplies from the West (i.e., cargo).

The islanders began to perceive this cargo as a source of power and wealth, and mistakenly attributed the regular shipments of these goods to their native island as a type of bounty bestowed by the gods.

This mystical perception was exacerbated by the islanders’ observations of American and European military personnel. Natives would watch the soldiers marching around in formation and conducting regular training drills, which led them to conclude that these repetitive activities were some kind of religious ritual intended to invoke the favor of the gods.

In turn, the natives speculated, the gods would “reward” the soldiers with shipments of cargo from the sea. Unfamiliar with modern manufacturing and distribution methods, the natives would suspect that this seemingly endless bevy of supplies was being produced by some sort of magical or spiritual means.

Understandably, these types of observations carried a great deal of appeal to the islanders; they saw that while they themselves were hard-working but poor, it seemed as if the Americans and Europeans simply had to write down a few things on paper, conduct a few “rituals”, and a shipment of bountiful goods would arrive in due time.

Once the Second World War was over, the Allied forces largely moved out, leaving the indigenous people of the island as isolated as they had been before the war.

In an attempt to possibly “activate” more cargo shipments, the islanders began to duplicate the military drills they had observed, building replicas of various pieces of military equipment using local materials in order to supplement their rituals.

They created makeshift airstrips in their fields, built piers on their shores, carved imitation “rifles” from bamboo, and in one well-documented instance, they even built an impressively detailed full-scale replica of a military airplane using wood, tree bark, and vines.

Replicas of military flags and uniforms were assembled as well, and as time went on, several symbols associated with Western society began to be implemented into the cargo cults’ rituals. Many ceremonies have been observed in which members of the cargo cult imitate a platoon of soldiers marching in formation, with the letters “USA” scrawled in red paint across their bare chests or backs.

At some point, certain members of the cargo cult developed a notion that the supplies that were being shipped to the islands during World War II were actually intended for them, and not for the Allied soldiers.

They surmised that the cargo shipments were gifts from their long-dead ancestors, but that these supplies were being “intercepted” by the Americans and Europeans who had only recently occupied the land.

In one famous incident, an islander known as Bateri attempted to lay claim to some of the cargo found at a military post office. Bateri had marginally learned to read and write, and was convinced that the boxes labeled “Batteries” were solely intended for him!

The rituals commonly associated with the cargo cults did not end with the replicas of military airports and equipment. Further into the jungle, islanders would build small huts to which cult members would bring their money and leave it inside, believing that the money would grow. Unfortunately, this money was often stolen, leaving the natives even more destitute than they were before. 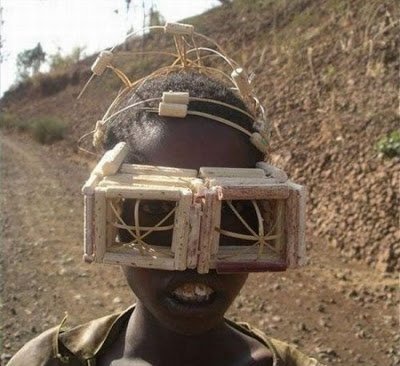 Perhaps the most popular figure associated with the cargo cult phenomenon is a man known as John Frum. The origin of Frum’s legend is largely unclear, but cargo cult adherents generally recognize him as their deity or messianic figure that will eventually return to the island to bring shiploads and planeloads of cargo to the natives once again.

Many researchers speculate that Frum’s name may have been derived from the common practice of American soldiers naming their place of origin during introductions, such as “I am John from New York” or “I am John from Wisconsin.”

It is generally believed that folklore regarding John Frum originated in the late 1930s in a small nation in the South Pacific Ocean known as Vanuatu. This collection of roughly 80 tiny islands became the epicenter of several stories regarding Frum, many of which vary greatly in their details.

Some legends claim that Frum was actually a “spirit vision” instead of a physical being, while others contend that Frum was a local hero that liberated the islanders from the oppressive social structures imposed on them by colonialists and Christian missionaries.

One of the more popular stories involves a native man known as Manehivi who used the pseudonym “John Frum”; according to the legend, he began appearing among the inhabitants of Tanna (a small volcanic island in the southern portion of Vanuatu) promising them clothing, houses, transportation, and food.

Frum also promised the emergence of a new era in which all of the non-indigenous peoples (including Christian missionaries) would eventually leave the island forever, forfeiting their property and goods for the benefit of the natives.

Although more than 60 years have passed since the Allied forces regularly occupied Vanuatu, the imprint of modern industry on this remote culture is still seen and felt in many ways.

Even to this day, natives of the island of Tanna celebrate John Frum Day on the 15th of February each year, and many islanders still cling to the promise of an eventual influx of cargo shipments if they continue diligently praying to Frum. Tanna also houses a ceremonial site dedicated to Frum that features a red painted marker in the shape of a Christian cross.

Cargo cults have been generally discouraged by the local authorities of Vanuatu, as it is believed that they divert people from engaging in productive activities. While any prospect of Frum re-emerging to make good on his promises is highly speculative, cargo cults remain a fascinating example of what can happen when modern technology and commerce intersect with an isolated culture.