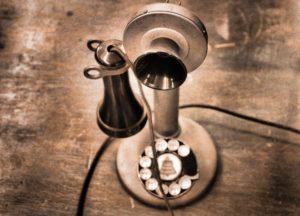 Martin Sheets was a wealthy businessman who lived in Terra Haute, Indiana in the early 1900’s. One of his greatest fears was that of a premature burial.

He often dreamt of being awake, but unable to move, at the moment the doctor pronounced him dead and then regaining consciousness while trapped in a coffin below the ground. Sheets decided to fight his fears by investing some of his resources in the prevention of his being buried alive.

First of all, he had a casket custom-designed with latches fitted on the inside. In this way, should he be placed inside prematurely, he would be able to open the coffin and escape.

He also began construction on a mausoleum so that when he died, or was thought to have died, he would not be imprisoned under six feet of dirt. The mausoleum was well built and attractive but Sheets realized that even if he did manage to escape from his casket, he would still be trapped inside of a stone prison.

He came up with another clever idea. He installed a telephone inside of the tomb with a direct line to the main office of the cemetery. In this way, he could summon help by simply lifting the receiver.

The line was fitted with an automatic indicator light so that even if no words were spoken, the light would come on in the office and help would soon be on the way.

Death came for Martin Sheets in 1910 and he was entombed in the mausoleum. I would imagine that for several days afterward, cemetery staff workers kept a close eye on the telephone indicator light in the office.

After more time passed though, it was probably forgotten. Years went by and the telephone system in the area changed. Eventually, the direct line to the cemetery office was removed but thanks to very specific instructions in Sheets will, and the money to pay for it, the telephone in the mausoleum remained connected and active.

A number of years later, Sheets widow also passed away. She was discovered one day lying on her bed with the telephone clutched in her hand. In fact, she held the receiver so tightly that it had to be pried from her fingers.

It was soon learned that she had experienced a severe stroke and family members assumed that she had been trying to call an ambulance when she finally died. A service was held and after a quiet memorial service, she was taken to the family mausoleum, where she would be interred next to her husband.

When cemetery workers entered the mausoleum, they received the shock of their lives. Nothing there was disturbed, they saw, except for one, very chilling item.

Martin Sheets telephone, locked away for all of these years, was hanging from the wall… its receiver inexplicably off the hook. No one could explain whether these events are related or not.