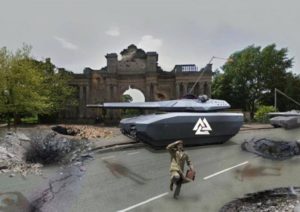 In this latest tale, world-famous psychic researcher Tom Slemen examines the mystery of the Phantoms of a Future War.

Regular readers of my books and newspaper articles over the years will know I believe that time travel is possible and that what we call time itself is not the straightforward linear thing we associate with clocks and calendars.

Time seems to occasionally ‘slip’ forward or backwards in increments of days, years or even decades, and these timeslips fascinate me.

Some of them are a physical phenomenon with the timeslipped person actually going back or forward in time on the material level, and some are psychological. We usually call them premonitions.

When someone mysteriously acquires knowledge of some place or incident in the past, it is known as retrocognition.

Timeslips often occur out the blue and can be quite a shock to the system.

We live our lives by the clock and the calendar, and it’s a chore to put the clocks back or forward an hour each year.

The Romans were a bit more flexible; they split their day into twelve periods of equal length, and these prototype hours varied in length between 45 to 75 minutes, depending on the season.

When a timeslip strikes, it naturally disorients those who have walked into it.

A few years ago, David, a Birkenhead electrician, went looking for an office near Hamilton Square where he was supposed to check a faulty light switch and he found himself calling at “Olivieris Bingo Club” somewhere opposite Hamilton Square Station.

It was a bingo club David had never heard of, and after being admitted by a smartly-dressed man, the electrician saw a calendar on a wall which told him it was September 1964.

David noticed the man who had admitted him was dressed in a very smart but dated suit, and asked he had an old calendar on the wall.

The man said the calendar was not old and shot a puzzled look at David.

The boss of the bingo club said he had not sent for an electrician and David left.

David told his mother what happened and told her son that a family named Olivieri had a café and a bingo club opposite Hamilton Square Station many years ago in the 1960s but those premises had long gone.

David went back to the bingo club and couldn’t find it.

I have so many of these purported incidents in my files.

A case in point concerns Mr Baker, a 42-year-old credit draper (also known as a tallyman or clubman) out collecting from his customers on the Thursday evening of July 9, 1959.

He called at a house on Park Road East earlier in the evening and a woman had told him to call back at 7.45pm when her husband would be home to pay him. Mr Baker called at the house, collected the payment, then left.

Walking down Park Road East, the credit draper was temporarily deafened by a loud blast that seemed to come from the sky.

This mysterious explosion was heard across the Wirral peninsula and never been explained.

Something else that happened that Thursday evening also remains unexplained and that is how Mr Baker came to find himself at some point in what seems to have been the far future.

The sun was now at high noon, and the streets around Birkenhead Park were deserted – and pitted with what looked like bomb craters of the type Mr Baker had last seen during the dangerous days of World War Two.

He also saw futuristic streamlined tanks with enormous barrels on Park Road East and the Grade II-listed Grand Entrance of Birkenhead Park heavily damaged and pitted with what looked like bomb shrapnel.

More terrifying still were the shadows of people’s outlines burnt into the tarmac of the road – as if they had been vaporized in their tracks by intense heat – or perhaps a radiation blast.

The tanks Mr Baker saw did not move and were emblazoned with an insignia that was unfamiliar to him – a symbol made up of three interlocking triangles.

This symbol sounds like the valknut – an ancient Norse sigil of obscure origin.

Mr Baker called at several houses, desperately wishing to find someone who could explain what was going on, but found them all to be empty, and did not see a single car on the road during this slippage in time.

MORE ARTICLES
He felt as if he was being watched on the eerily deserted streets of Birkenhead, and at one point the credit draper thought he heard voices coming from the park, and believed that one of the overheard words sounded Italian: “Pomma geetya”.

This might have in fact been Russian for “Help” – Pomogite. But what would Russians be doing in Birkenhead Park?

Mr Baker got as far as Price Street when he heard the horn of a ship on the Mersey, and in an instant he found himself back on a busy street in a twilit Birkenhead.

He gingerly returned to Birkenhead Park and found the strange tanks, bomb craters and shadows of vaporized people gone.

Was it all in Mr Baker’s mind, or had he glimpsed the aftermath of some future war?