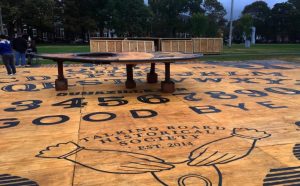 On the historic Salem Common, a colossal record-breaking version of the famous spirit board was set up, reports geek.com.

The Ouija board, which has been a staple of horror films, paranormal experiments and mediumship sessions for over a century, is usually operated by the participants putting a finger on a planchette which then switches between the written letters and words to spell a message from beyond the grave.

Nevertheless, the operation of this Ouija board involves much more than one hand.

The gargantuan creation called’ Ouijazilla,’ is the work of Rick ‘Ormortis’ Schreck, vice president of the Talking Board Historical Society, who spent the majority part of a year putting it together.

The panel was put on display this weekend at Salem Common, weighing in at 9,000 pounds and measuring 3,168 square feet, where tourists were stunned by its large size.

The planchette, weighing 400 pounds alone, is built for one person to push.

Nonetheless, it remains to be seen if the board can pick up any messages from the other side.