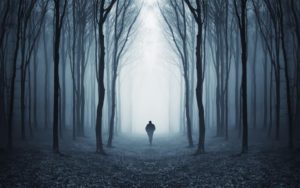 The movie, “The Blair Witch Project”, portrays a terrifying bit of (fictional) folklore where people mysteriously disappear deep in the woods, go insane, or witness strange sights or sounds. Although fictional (yes, “The Blair Witch Project” is completely fiction and no, there is no plot to cover up the truth), events portrayed in the movie have occured in real life. During a five year period in the Green Mountains of Vermont, 10 people have disappeared without a trace in an area of woods known for mysterious creatures, strange lights, and spooky specters.

Many unexplained events have baffled and mystified people throughout Vermont history, but none were as startling and publicized as the mysterious disappearances of ten people in the Glastenbury Wilderness.

In his book, “Green Mountain Ghosts, Ghouls, and Unsolved Mysteries”, Joe Citro calls the area in Bennington near Glastenbury mountain, the “Bennington Triangle”. It is similar to the more famous Bermuda Triangle in that it has been a hotspot for UFO activity, strange lights, sounds, odors, specters, mysterious creatures…and more startling, human disappearences.

American natives shunned the place, using it only for a burial ground. They believed the land to be cursed because all four winds met in that spot. There is also mention in native American folklore of an enchanted stone which is said to swallow anything that steps on it. Since then, numerous people have died mysteriously, suffered many hardships, and have gone insane.

In 1892, a millworker named Henry MacDowell killed his co-worker, Jim Crowley in a drunken fight. He was sentenced to life in an asylum, but escaped, never to be seen again.

On November 12, 1945, 75 year old Middie Rivers led four hunters onto the mountain on an unseasonably mild day. When the group was returning to camp, near Long Trail Road and Route 9, Rivers got ahead of the others and was never seen again. Police and many volunteers searched the area for the experienced woodsman but never found him. The only clue was a single bullet which his friends speculated fell out of his belt when Rivers took a drink of water.

A little over a year later, on December 1, 1946, an 18 year old sophomore at Bennington College vanished without a trace. Paula Welden hitched a ride to the Long Trail to take a day hike. Several witnesses confirmed seeing her on the trail after she hitched the ride, but when she did not return to school, a search team scoured the area. Despite a 5,000 dollar reward and help from the FBI, Paula Welden was never seen again. Two unconfirmed rumors circulate about her whereabouts. Some say Paula arranged her disappearance and moved to Canada with a lover; while others speculate she still lives a reclusive life on the mountain.

Three years to the day after Paula Welden’s disappearance, a James E. Tetford vanished. Tetford boarded a bus in St. Albans after visiting relatives. He never got off the bus at the Bennington Soldiers Home where he lived. His presence on the bus was confirmed at the stop before Bennington, buthe was not on the bus when it reached Bennington. None of the passengers, including the driver, had any idea what happened to him. 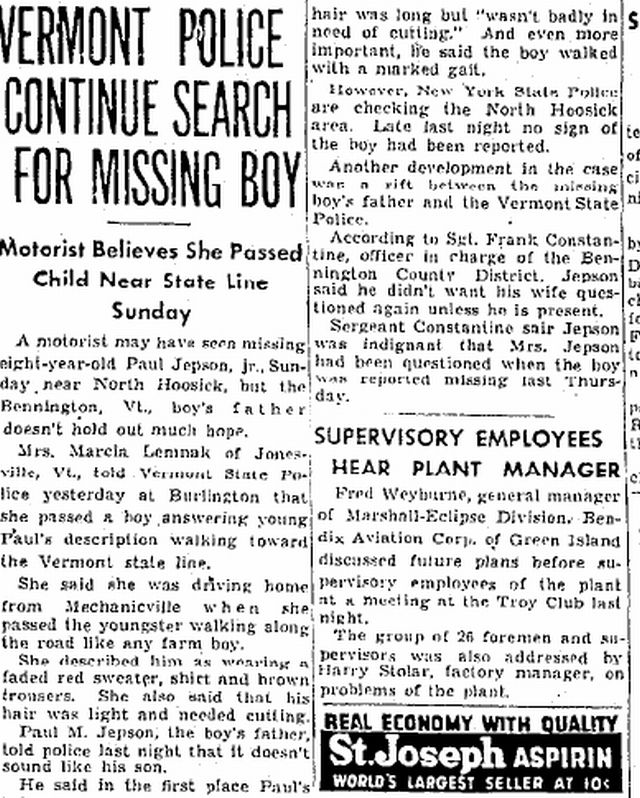 On October 12, 1950, 8-year old Paul Jepson became another victim of the Bennington “black hole”. His parents were caretakers for a dump. His mother was tending to some pigs, leaving Paul unattended for no more than an hour, only to find him gone…without a trace. According to Paul’s father, the boy had a strange “yen” to go into the mountains. Although Paul was wearing a red jacket, which would have made him more visible, intensive search parties found nothing. Blood hounds traced his scent to a highway and suddenly lost it, suggesting that Paul was picked up, or maybe vanished into thin air.

Two weeks later on October 28, Freida Langer was hiking with her cousin Herbert Elsner. After falling in a stream, Freida told her cousin to wait there while she ran a half mile back to camp to change clothes. When she didn’t return, Elsner went back to camp only to discover that she had never arrived, and nobody saw her leave the woods. Freida knew the area well and was unlikely to get lost, especially since it was still broad daylight.

Search teams scoured the area on foot, by plane, and hellicopter finding nothing. Another search on November 5 and 7 turned up nothing at all. And on November 11 and 12, 300 military, police, firemen, sportsmen, and volunteers also came up emptyhanded. On May 12, 1951, Langer’s body did turn up, in an open area where she would not have been missed during the search. The cause of death was unknown.

A 13-year-old boy named Melvin Hills disappeared in the Bennington area around October 11, 1942, and in 1949, three hunters mysteriously vanished as well in the Glastenbury area.

The disappearences stopped after 1950, and to my knowlege, no one else has vanished in the area since then.

Many theories attempt to explain the strange phenomenon of the Glastenbury area vanishings. One paranormal-based theory speculates that their are interdimensional horizons in which people step into, leaving this world. Some speculated that they were abducted by aliens, while others suggest the Bennington Monster (a large creature said to lurk in the woods of the area) carried them off.

Another, more logical theory is that perhaps a serial killer was responsible. However, their was no pattern to the killings. Serial killers usually target a certain type of individual, and the Bennington victims ranged in sex and age. The only pattern was that all disappearences occured during the months of October, November, and December. And one final theory, but no closer to an answer, is that perhaps the victims fell into abandoned wells.

Despite these many disappearances, many people including camp owner Larry Lauzon, who appeared in a Burlington Free Press article, says he spends much time in the Glastenbury wilderness and has yet to encounter anything strange. Whatever happened to the 9 or 10 people who vanished in the wilderness is still a mystery.