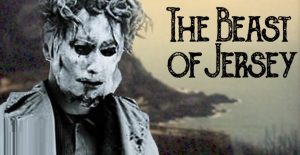 Edward Paisnel (1925 – 1994), dubbed the Beast of Jersey, was a notorious sex offender who terrorised the Channel Island of Jersey for a period of eleven years from 1960.

He entered homes at night dressed in a rubber mask and nail-studded wristlets, attacking women and children. Reports that he would visit Haut de la Garenne children’s home are disputed. His wife, Joan Paisnel, was the founder of another community home in Jersey and it was there, at her request, that he once played Santa Claus.

Suspicion for the attacks initially fell on an eccentric agricultural worker and fisherman, Alphonse Le Gastelois, who was arrested but released through lack of evidence. Public suspicion remained so strong, however, that Le Gastelois’ cottage was burnt down in an act of arson.

Le Gastelois, fearing for his life, fled to Les Écréhous where he spent 14 years in self-imposed exile on La Marmotière as the second self-styled king of the Écréhous despite being cleared of suspicion when the attacks of the Beast of Jersey continued unabated. 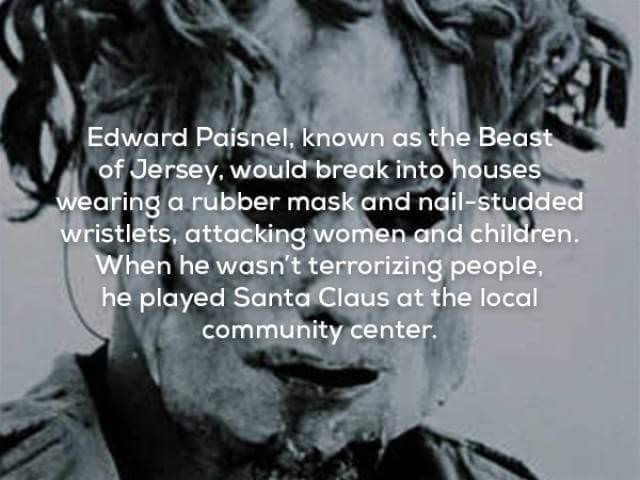 On 17 July 1971 Edward Paisnel was stopped by the police after jumping a red traffic light and then attempting to evade the police pursuit. In the car, which he had stolen earlier that evening, were discovered elements of his “Beast” costume. In December 1971 he was convicted of 13 counts of assault, rape and sodomy and sentenced to 30 years in prison.

Edward Paisnel returned to Jersey briefly following his release from prison but moved away due to the strength of local feeling against him. He died in the Isle of Wight in 1994.

Edward Paisnel was known there as Uncle Ted and handed out sweets and toys while trying to groom children.

The son of a wealthy Jersey landowner, he terrorised the island for more than a decade, abducting and abusing children.

He was obsessed with black magic and wore a rubber mask and nail-studded bracelets during his attacks.

He worshipped the French child-murderer Gilles de Rais, hanged in 1440 afteradmitting killing around 200 youngsters he had lured to his castle ‘for mydaily pleasure’.

Paisnel was 46 when he was finally caught and found guilty of 13 charges of assault, rape and sodomy.