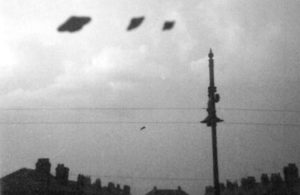 It is an understatement to say that something quite extraordinary took place on September 16, l989, in the skies above Zaostrovka, port on the Kama river on the western side of Perm, the Ural region of Russia.

Many local residents reported, what in essence was a UFO dogfight. Six classic saucer-shaped objects appeared to be chasing a seventh, darker coloured UFO.

As it tried to escape, the six flying saucers made hairpin turns, climbed steeply, and dropped to below 5,000 feet in the evening sky, shooting beams of light at the golden flying saucer, which also fired light beams as it took evasive maneuvers.

At times, pencil-like rays of light could be seem to come from these objects, likened now as a scene from the ‘Star Wars’ movie.

It was written by a former Russian helicopter commander in the Afghan war who said that the energy generated from the flying disks was so intense it shut down the power grid in Zaostrovka and plunged the city into darkness just as evening fell.

“Workers watched with horror in their hearts,” the witness said, as the combat raged over their heads. With their city completely blacked out, all the observers could do was watch the fight play out, just as if they were spectators at a football game, and comment on the unreal show going on above them.

He is a former helicopter pilot for the Soviet military and he now lives in Stockholm, Sweden. According to Sychenko, a number of witnesses described the UFO’s as looking almost saturn-shaped and appeared to be around 20 meters in diameter.

In the end, the gold-colored saucer couldn’t escape the attack, was hit repeatedly with the weapon beam, and began to lose altitude. At first the saucer’s fall seemed controlled, as if it were looking for a place to set down and escape the craft in pursuit.

But it couldn’t sustain its controlled descent and finally disappeared behind a house. The formation of six flying saucers seemed to establish a search pattern to look for the crash site approximately ten kilometers outside the port city. They then disappeared.

The UFO is alleged to have crashed into the Russian military firing range at Belaya Pashnya, approximately 120 Kilometres north-east or Perm. Local UFO researcher Emil F. Bachurin visited the crash site in the autumn of 1990 but was not allowed access to it by the Russian authorities.

Information fed to Bachurin and his colleagues have suggested the Russian military were quickly at the scene of the crash site. It was sealed off and was quickly made a restricted area.

Even today, the area is still under guard. As yet, no details have been uncovered regarding the military operation in the area.

Russian ufologists are nevertheless convinced that a special military unit was dispatched to the area in order to recover the downed UFO. Two military units are suspected of being involved, unit 67947 (in Mytiszi, Moscow region) and/or unit 73790 (in Zhitkur).

The UFO was probably removed and transported to the Zhitkur base. Zhitkur is the Russian equivalent to the US ‘Wright Patterson AFB’, a place where captured alien technology is reportedly sent for study.

Russian UFO researchers are still attempting to uncover more detail on this and several other similar incidents. If more information can be uncovered it could go a long way to lifting the lid of UFO secrecy in the former Soviet Union.