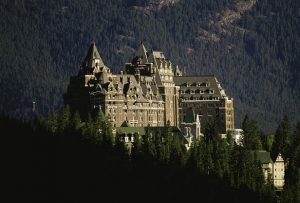 Situated within the Rocky Mountains in Banff, Canada, surrounded by majestic peaks and beautiful landscapes, you would be surprised to know that the Banff Springs Hotel, now called the Fairmont Banff Springs, is one very haunted place. In fact, it is considered to be one of the most haunted places in all of Canada. Built in 1887, the Banff Springs was once a railway hotel constructed by Bruce Price over the course of 1887 and 1888.

From the beginning, the hotel had odd features about it. For one, when it was built for $250,000, an error resulted in the hotel’s orientation facing away from the mountains. Originally built with 100 rooms, that was expanded in 1902 to 200 rooms, and it was not until 1914 when the hotel was completely renovated so that the rooms faced the mountains, rather than the other way around.

The hotel has been the site of unfortunate fires, and royal visits and is considered to be one of the best places to stay not only in Canada, but North America. The hotel is located right near Bow Falls, and thermal springs, which is where the hotel gets its name from. You can also walk from the hotel to the community of Banff, which is one of the most popular tourist destinations in the world.

Over the years, the hotel has been rebuilt, expanded, renovated and, in the case of 1968, winterized. However, through it all, the spirits of the hotel stay with it, perhaps because it was such a nice place they simply do not want to leave it. Who can blame them; it is a stunning hotel that is usually full, all year round.

One very odd thing about the hotel was the phantom room. An error in building resulted in an extra room being built. The room had no windows, and no one knew it existed except for the builders who closed in the room so no one would discover the mistake. It was not until years later during a renovation when the room was discovered and converted into a working room. From that point on, the room became known for unusual sounds, strange shadows and a general feeling of being haunted for anyone who goes into the room.

However, this is just one of the many strange rooms and places within this amazing building. In room 873, which is not longer in existence thanks to renovations, there were many strange happenings. One of the strangest things is the child’s handprints that would appear on the walls.

Workers and cleaners would then come in and clean off the handprints, only to have the handprints reappear within a few hours, to a few days. Naturally, people staying in this room always felt as though they were not alone, and it was accepted that room 873 was haunted. It should come as no surprise then that during renovation, the room was sealed off and completely covered to make it look like it was never there. Are the children who inhabited that room still in there, sealed off from the world? Until someone stays in this sealed off room again, no one will ever know.

One spirit is not out to scare people but help them. He is Sam the Bellhop and he is one of the most famous ghosts in the entire hotel. Sam has been known to open doors for people, help people into locked rooms, perform wake up calls and more. He is described as very friendly and when a patron comments to the front desk about the helpful bellhop, the employees know that Sam has been making his regular rounds. He is a good ghost that seems to be someone who just wants to keep working at a place he loved during his life.

Joining Sam are two more former employees of the Banff Springs Hotel. The first is a ghost bartender who will often tell individuals who have had too much alcohol that they need to go to bed. The second is a headless bagpiper who can be seen on the grounds around the hotel.

Probably the most famous, and most tragic, of the ghosts at the Banff Springs Hotel is the ghost of a bride. As can be expected, the Banff Springs Hotel is often a site of honeymoons because it is so beautiful. With the amazing landscape and history of the area, there have been weddings at the hotel for the past 100-plus years. However, not all weddings have been happy occasions and such was the case on a fateful day in 1926. Stories vary about what happened but the two most common tales tell of a bride walking down a staircase in her wedding gown as everyone waited at the bottom.

As she walked she either tripped on her dress, or her dress caught fire from the candles that lined along the staircase to the bottom. However it happened, she lost her balance and fell down the stairs, breaking her neck and dying on what was supposed to be the happiest day of her life. Today, many visitors now see the bride floating around the stairs, wearing her white gown. On other days, she may be dancing by herself in a ballroom that should have been the site of one of her happiest moments, not the tomb of her spirit. The staircase is now blocked off at the top, but the bride continues to move up and down the stairs replaying the fateful day when a wedding turned into a funeral. To this day, she has made the Banff Springs Hotel her home.

The Banff Springs Hotel may be very haunted but that has not stopped it from being one of the most popular places to stay in all of Canada. There are few who come to the hotel who do not experience a wonderful time, looking out at the mountains and enjoying being around such a beautiful place. As a result, it should come as no surprise that so many spirits, especially employees, have chosen to come back to the site of happy memories, where they can work for the rest of time.

Of course, with ghosts like the bride, it is not always happy memories that keep them rooted in the hotel, but sad memories and the hope of changing a future that has already happened. All in all, while the hotel may be majestic and beautiful, that does not stop it from being one very haunted location to stay in. If you stay here, don’t be surprised if you come across a long dead inhabitant, or employee, of the hotel.

Ghost of Major Thomas Weir: The Wizard of West Bow