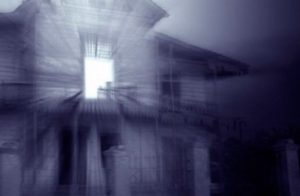 In 1865 neighbors reported weird phenomena in a house near Fort McHenry. They believed the ghost of an Englishwoman who starved to death with her two children haunted it.

Her husband deserted her. She was too proud to ask for food. After she died, neighbors heard noises emanating from the house and would see her ghost rocking in the chair with her children.

Shortly after the deaths, the Boidie family moved in and felt a hostile atmosphere. There was a cold spot. When people walked by, flames of their candles died. There were inexplicable chills and breezes. Sounds of crying and a rocking chair in a room that had none were heard.

One of the sons was quarantined with typhoid. One night, he screamed and said he had been slapped by a female, evidenced by the red mark on his cheek. Other family members were slapped. They moved out as soon as the boy recovered.

In 1960, Mr. and Mrs. Jones, daughter and son-in-law, Mr. and Mrs. Pauls, and Ted, 17 year old son, shared the home. It is not clear whether or not they knew the house’s history; however, this is a moot point. Ted was highly intelligent, but dropped out of school and spent most of his time reading about the supernatural and science fiction.

The activity began when miniature pitchers exploded. Then items jumped off shelves and crashed through windows, plants jumped from their pots, soda bottles exploded and pictures fell off walls. A can of sauerkraut hit Mr. Jones on the head. A table moved and hurled itself down the steps. Kindling wood exploded in the cellar.

Things became so frightening that Mrs. Jones fled to stay with her sister. Jones and Pauls threw all of the furniture and breakable objects into the back yard. The activity ceased.

Reporters interviewed the family and publicized the strange happenings.

The locals had theories. To some, this was a hoax. Others proposed the events were caused by earth tremors, sound waves or radio signals which professional scientific tests failed to prove.

A plumber said the hot air furnace was the cause. The family should remove all storm windows and open a window in the dining room. Once this was done, the activity stopped.

Nandor Fodor, eminent parapsychologist, investigated this case. Fodor started his investigation before the activity ceased. He discovered Ted was brilliant and felt he was misunderstood and unappreciated.

He was a human agent poltergeist, HAP, who expressed his negative emotions by subconsciously releasing PK, psychokinesis, the ability of the mind to affect matter. Fodor believed Ted was a gifted writer and that, if he felt appreciated, his esteem would improve, ending the activity.

The parapsychologist asked Ted to write a record of the activity as therapy. The boy’s family began to respect him, so he was able to accept himself, heightening his self-esteem. Fodor said the reason the activity ceased was because Ted’s frustration and other unpleasant emotions were released.

The most amazing part of this case is not so much that the phenomena stopped because psychotherapy is the cure for HAPs. What is surprising is that the Jones family didn’t believe Fodor was the one who helped end the activity. They believed it was the plumber’s suggestion that stopped the phenomena.