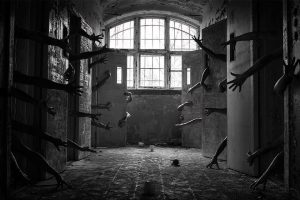 The story I am about to tell you is by far the scariest (and most exhilarating) experience I have ever had. I have been a fan of ghost stories for a long time, but never thought I’d have a chance to stay in one of the most haunted places in the U.S.

The Baker Hotel is pretty well known by local ghost hunters. It is a 13-story hotel that was built in the early 1900’s in the now small town of Mineral Wells, TX. The hotel was built as a spa-resort, due to the supposed healing mineral water in the area, and at times housed everybody from Bonnie and Clyde to Judy Garland and Clarke Gable.

The Three Stooges even had their own suite there they visited so much. JFK and Marilyn Monroe were rumored to have had a tryst there as well. Keep in mind, though, that the waters were supposed to be healing, and were heavily prescribed by doctors – so many very ill people flowed through the doors of the Baker to get well–and many died there.

Anyway, as medical science began to disprove the worth of mineral water, the hotel went out of business in the 1970’s, and has recently been condemned. For a while, a local historical group was leading “ghost” tours through the abandoned and severely neglected hotel, which involved a tour from basement to top floor and an unchaperoned sleepover in hotel office.

My boyfriend and some other friends (about nine in all) all decided to take this tour. We were the last group of tourists to ever go through the building (the town is fighting right now to save the building and making it a historical attraction, city officials are wanting to level it and make it a parking garage.)

When we first entered the hotel (through a side door, the huge, heavy wooden front doors were kept firmly locked– important) we were immediately greeted by a 20 degree temperature drop. The large front foyer, with huge marble archways and peeling gilded trim immediately brought to mind the hotel in “The Shining.”

The whole place was engulfed in an incredibly eerie feeling that none of us could shake. We almost didn’t want to talk.

To make a long story short, we toured the building from top to bottom (with only flashlights lighting the way, there was no electricity.) Every floor of the place had a different smell, temperature, or vibe; every floor had a story.

I could tell you about all the ghosts the tour guide had herself witnessed, all the stories that had taken place there, but that would be too long (and you can find these stories on the web). I will only tell you what happened to me and my group.

The first thing happened while we were on tour. I was already on edge, because the place was just so eerie, the vibe of the place’s history reverberated off of everything. I could just feel it, could cut it with a knife. We went to the kitchen area, and I really didn’t want to go in.

Something was holding me back, and when I finally entered (I wasn’t going to be left behind by myself!), I was terrified. Huge prep tables still remained, cob-webbed and covered with dust. Huge refrigerators, rusty from age.

There was an old bread warmer, and the tour guide showed us the dents on the top that looked as if someone had been locked inside and was banging to get out. There was a bullet hole directly through the top of the warmer, as if someone wanted the person entrapped inside to shut up.

The guide then told us a story of the kitchen. Apparently, a cook had been having an affair with one of the maids. She confronted him there, and threatened to tell his wife about the affair. They had a huge argument, and he had stabbed her many times with a butcher knife.

I thought, maybe that explained the bad vibe. The guide led us to the pantry that was nearby and we walked in. Once again, I felt this urge to not go in. Once inside, the guide was telling us about the pantry, when I heard something. I sounded like something between a whisper and a vocalization, a female voice…”Leave!” The message was clear. I interrupted the tour guide…

“Did you guys hear that?”

Another girl turned to me wide-eyed, “You heard it too? Something said leave?”

The tour guide was now wide-eyed too. She said that she had heard the same thing there before.

“This is where the cook is said to have finished her off.”

The next story happened late that night. The group was now alone, huddled up in sleeping bags, afraid to actually go to sleep. Since there was no electricity, we had lit candles all over the room. The room we stayed in was actually the hotel office.

It was located on the second floor. One side had french doors that looked down upon a large ballroom. The other side was open, and looked down upon the front foyer and entrance. It was about four in the morning, and finally, everybody was beginning to sleep.

My boyfriend and I were whispering drowsily to each other, when we heard voices downstairs from either the ballroom or foyer. They seemed to come out of nowhere, softly at first, then building. It was a man and a woman having an argument.

The man sounded old and had a “cigarette” voice. He coughed and moaned, “Margaret!” The woman began to cry at the top of her lungs. Both voices sounded old fashioned, out of our time. The woman was actually almost screaming.

My boyfriend and I were startled at first, we clutched each other, terrified. Then he bolted up, me calling him to come back. He started to tell everybody to wake up, wake up!

Everybody raised up, sleepy at first, but then wide awake when they heard what was happening. My boyfriend, brave as he is (or probably stupid) ran outside to look down into the foyer, then the ballroom. He came back saying he didn’t see anything.

Finally, after about five minutes, we heard two very loud bangs from the foyer, like the heavy front doors had been slammed shut (they were locked tightly, remember?) The voices were gone. It was tough to get to sleep after that.

The next morning, we looked, but nothing downstairs was out of place, most certainly not the front doors. Others in my group said that they had heard doors slamming throughout the building all night long. So, that was my experience staying the night in a haunted hotel. I didn’t see anything, but I most certainly heard it!

Renovation Ghosts: Home Improvements Can Cause a Haunt