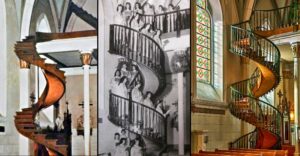 You perhaps have heard of it, the staircase at Loretto Chapel in Santa Fe, New Mexico, where – according to the literature – nuns who operated a convent there began a novena to Saint Joseph, patron of carpenters and builders, when they needed a way to easily traverse up to the choir loft, which previously had been accessed by a ladder.

Their dilemma was that there was no room for a stairway as normal stairways go. A flurry of carpenters they consulted had said so.

According to accounts, on the last day of the novena, a gray-haired man came to the convent with a donkey and a tool chest — basically, a saw, a hammer, and a square. He also needed tubs to soak wood.

They gave him the job, and he set about the work on July 25, 1873, taking what is now estimated as six to eight months to complete it. Only wood pegs (no nails) were used. And the result was exquisite.

“The winding stairway that the old man left for the sisters is a masterpiece of beauty and wonder,” noted St. Joseph Magazine.

“It makes two complete 360-degree turns. There is no supporting pole up the center as most circular stairways have. This means it hangs there with no support. The entire weight is on the base. Some architects have said that by all laws of gravity, it should have crashed to the floor the minute anyone stepped on it and yet was used daily for nearly a hundred years.”

Indeed, there are photos of the staircase filled with members of the choir! 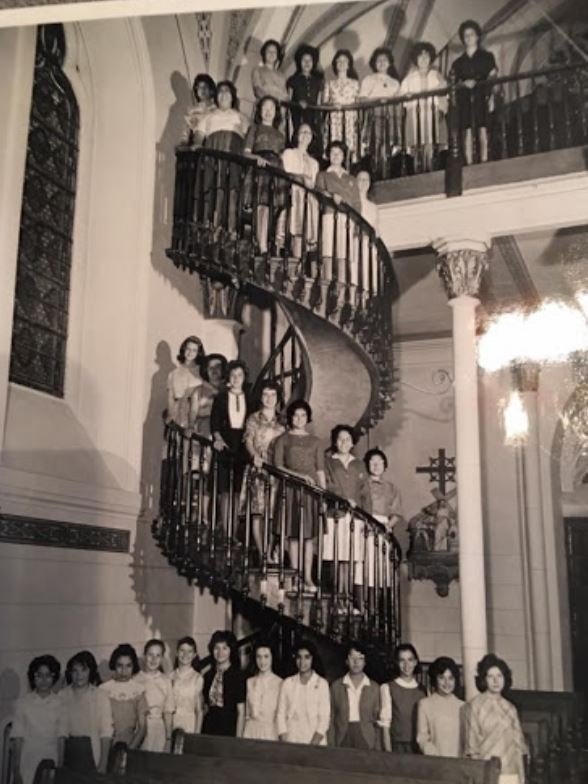 When the sisters went to pay the man, continues the account, he had vanished. There is no record of paying anyone a penny for the incredible piece of carpentry.

We have had an article on this previously. “I spoke with Urban C. Weidner, a Santa Fe architect and wood expert, about the staircase,” noted Sister M. Florian.

“He told me that he had never seen a circular wooden stairway with 360-degree turns that did not have a supporting pole down the center. One of the most baffling things about the stairway, however, is the perfection of the curves of the stringers, according to Mr. Weidner. He told me that the wood is spliced along the sides of the stringers with nine splices on the outside and seven on the inside. Each piece is perfectly curved. How this came about in the 1870s by a single man in an out-of-the-way place with only the most primitive tools has never been explained.”

Indeed, it is a gorgeous piece of woodwork – now with banisters (it was originally constructed without any).

An angel? St. Joseph himself?

“Sisters, going in to the Chapel to pray, saw the tubs with wood soaking in them, but the man always withdrew while they said their prayers, returning to his work when the Chapel was free,” says another account.

“Some there are who say the circular stair which stands there today was built very quickly. Others say no, it took quite a little time. But the stair did grow, rising solidly in a double helix without support of any kind and without nail or screw. The floor space used was minimal and the stair adds to, rather than detracts from, the beauty of the chapel.”

Some claim the riddle of the carpenter’s identity was finally solved in the late 1990s by Mary Jean Straw Cook, author of Loretto: The Sisters and Their Santa Fe Chapel (2002: Museum of New Mexico Press). She claimed his name was Francois-Jean “Frenchy” Rochas, an expert woodworker who emigrated from France and arrived in Santa Fe around the time the staircase was built.

In addition to evidence that linked Rochas to another French contractor who worked on the chapel, Cook found an 1895 death notice in The New Mexican explicitly naming Rochas as the builder of “the handsome staircase in the Loretto chapel.” 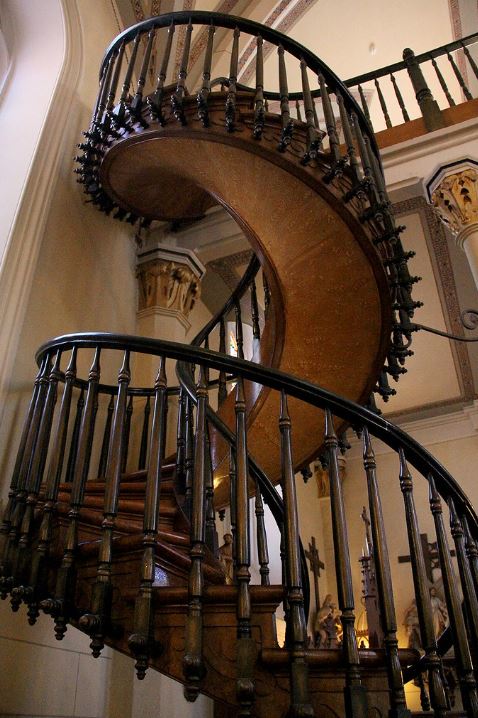 However, the skeptical viewpoint comes in large part from a magazine operated by humanists and atheists (and in fact called The Skeptical Inquirer).

We would like to emphasize another twist to this mystery. It comes to us from Richard Lindsley, who managed the Loretto Chapel (which is now in private hands) from 1991 to 2006 and says at one point he took a sample of wood from the staircase and gave it to a scientist named Forrest N. Easley, who worked at the Naval Air Weapons Station at China Lake, California.

“I went to the top of the stairs,” Lindsley told Spirit Daily. “There’s a crack that’s held together with a metal plate. The staircase had sunk an inch or inch-and-a-half into the floor. That’s where I pried a loose piece and gave it to him. I expected to hear the results quickly.”

Instead, says Lindsley, two months passed and he all but gave up about hearing anything. But one day, he recalls, Easley showed up at the chapel because he wanted to report his results in person. What he told Lindsley was straight to the point: the wood sample was spruce of no known subspecies. It matched nothing in the scientific record.

Easley had wanted to thoroughly search through all known data. That’s what had caused the delay. He researched it further and after 18 months came out with a careful, measured statement saying that the wood from the staircase had molecules that were “very dense and square” and indicated that it had come from trees that grew slowly in a “very, very cold place,” like Alaska, not New Mexico.

That was interesting because at the time the chapel was constructed – by the mysterious stranger – there was no rail system that could have brought in the wood from such a distance, and no local trees that grew above an elevation of 10,000 feet – which is the only place of comparable cold.

The closest match remained spruce from Alaska. In short, it was no known type.

The Plants Are Psychic?